AVIAN FLU IS COMING, and STAR ANISE IS A KNOWN CURE!

You have some of this magic powder, around, right? You probably do. It's an ingredient in five spice, a common chinese seasoning agent.

http://www.masterjules.net/avianflu.htm is my article on the disease (headed here as we speak!)

It is Viral, ergo no commercial medicine can nail it.  BUT HOLISTIC HEALERS have many VIRICIDES.And, NOW this star anise magic healing info shows up. Article from "The Independent", a newspaper in the U.K.

Why an exotic fruit is the world's best weapon against swine flu, bird flu, bat flu, goose or duck flu.
Althought VEGETARIANISM for everybody on earth  also rates. 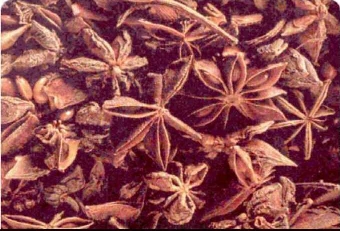 A rare herb grown in China used to flavor duck dishes and treat infants for colic is at the center of a worldwide search for a cure for those killer flus. This is the herb that is used to make TAMIFLU a prescription medicine. It is available in America through Chinese herbalists. Buy enough to make tea for a few months as that's how long this flu will be with us.

Star anise, the unusual fruit of a small oriental tree, is sold in supermarkets in the UK to consumers seeking its pungent, liquorice-like flavor. But the herb has a vital function as the source of shikimic acid from which the drug Tamiflu is made, the only defense the world currently has against the threatened flu pandemic.

Tamiflu cannot prevent infection with avian flu but it can reduce its severity. In the absence of an effective vaccine - which has not yet been developed - it is all that stands between the world and what could become a modern plague.

Yesterday it emerged that a shortage of star anise is one of the key reasons why countries including Britain cannot obtain enough Tamiflu to protect their populations. European Union ministers met last time Avian flu popped up to discuss measures to reduce contact between wild birds and poultry to curb its spread.

The deadly H5N1 strain of the virus, which has infected more than 100 humans, killing more than 60, in the Far East, was identified in poultry in Turkey. Results of tests on infected birds in Romania are expected to be revealed on Monday. EU scientists agreed measures that could lead to millions of chickens and turkeys being kept indoors to prevent contact with migrating birds.

In Britain, the Animal Welfare minister Ben Bradshaw said that the Government had not ruled out ordering free-range poultry in Britain to be moved indoors.

As moves to halt the growing threat of avian flu intensified, governments sought to stockpile the only drug currently available to offer any sort of defense for humans. The herb from which Tamiflu is made is grown in four provinces in China and "huge quantities" of its seeds are needed, according to the Swiss pharmaceutical manufacturer Roche.

It is harvested by local farmers between March and May, purified and the
shikimic acid extracted at the start of a 10-stage manufacturing process
which takes a year.

Only star anise grown in the four provinces of China is suitable for
manufacture into Tamiflu and 90 per cent of the harvest is already used
by Roche.

The company has faced demands to relax the patent on the drug to allow
other manufacturers to produce it.

Keith Taylor, of the Green Party, said: "Some countries have asked the
World Health Organisation to pressure Roche into relinquishing the patent in
order to allow a cheaper, generic version of the drug to be produced on a
national level.

"The WHO refuses, citing Roche's donation of three million treatment
courses as evidence that Roche is being responsible. This decision jeopardises
millions of lives in the name of profit and is anything but responsible."

However, Roche responded by saying: "Because of the shortage of the raw
material it would be very difficult for another manufacturer to set up
production."

The UK Government has ordered 14.6 million courses of Tamiflu, enough
for 25 per cent of the population, but only 2.5 million courses have so far
been delivered. Other countries, including the United States, are behind the
UK in the queue. Roche said it had doubled production of Tamiflu in 2004,
doubled it again in 2005 and planned to double it again next year. But
it said calls for the patent on the drug to be removed so that other
companies could boost manufacturing capacity to meet the worldwide demand would
not work.

The spokeswoman said: "It would take two to three years for another
company to build the manufacturing capacity. The process is very complicated and
the drug takes us 12 months to produce. Once you have built the facilities
you have to get regulatory approval and the manufacturing licences.

"And then there is the shortage of the raw material."

Roche has developed a synthetic source of acidinic acid, made from the
bacterium E Coli. Vast quantities of E Coli are mixed with glucose in
vats the size of two buses. But star anise remains the chief source, the
company said.

Once shikimic acid is extracted from the seeds of star anise it is
converted to epoxide in a process requiring three chemical steps carried out at
low temperature on seven separate sites.

The most dangerous part of the process involves the conversion of
epoxide into azide in a reaction that produces highly explosive material. This
is carried out by specialist companies that handle the material in small
quantities to reduce the risk of explosion.

Currently only one US company and two European companies are approved by
the drug regulatory authorities in America and Europe to carry out the
process.

The final step involves the production of crystal strands of the active
ingredient of Tamiflu, whose chemical name is oseltamivir, which are
vacuum dried and converted to capsules.

The World Health Organisation yesterday declined to comment on reports
that it was in negotiation with Roche over the lifting of the patent on
Tamiflu.

"If we were in discussion with them it would be to relieve the supply
shortage of the drug and to help poorer countries.

"But it would not be helpful to do that in public," a WHO spokesman
said.

Google search on keywords: "discovered" + at The Final Phase Forum:
. the Bird Flu Virus... and many other viruses and bacteria.

Our POSTER is ANITA SANDS HERNANDEZ, Los Angeles Writer, Futurist and Astrologer. Catch up with her websites  TRUTHS GOV WILL HIDE & NEVER TELL YOU, also The  FUTURE, WHAT'S COMIN' AT YA! FRUGAL LIFE STYLE TIPS,  HOW TO SURVIVE the COMING GREAT DEPRESSION, and Secrets of Nature, HOLISTIC, AFFORDABLE HEALING. Also ARTISANRY FOR EXPORT, EARN EUROS....* Anita is at astrology@earthlink.net ). Get a 35$ natal horoscope "my money/future life" reading now + copy horoscope as a Gif file graphic! No smarter, more accurate career reading out there!

<=== BACK TO THE HARD TIMES INDEX PAGE

<==BACK TO THE HOLISTIC ARCHIVE, 100 WAYS TO REJUVENATE, PREVENT DISEASE

<===BACK TO THE REAL ESTATE INDEX SO POOR PEOPLE CAN BUY