When Bob and Bonnie Tweedie decided to add on to their farm home near Laura, Saskatchewan, they wanted a mode of construction that would be durable and lasting, one that would blend with the landscape, use materials at hand, and most importantly, be something they could do themselves. They found it all in stackwall construction.

Stackwall construction (also known as cordwood masonry) is a method where solid walls are built from logs cut in six-inch lengths and set into concrete with the cut ends exposed. The method is not new. It was used widely in the late 1800s in eastern parts of North America where stackwall barns and houses can still be seen today.

Most stackwall buildings of the bygone era had a single six- to eight-inch thick wall. Bob Tweedie didn't like the insulation prospects of a single wall structure in prairie winter conditions, so he designed his addition to have six-inch inner and outer walls with eight inches of insulation between. Other builders who have used the stackwall method have covered the inside surface of a single wall with tarpaper, plumbed a two-by-four frame three-and-a-half inches from the stackwall and filled the space in between with horizontally laid R12 batts. FUZZY STUFF. The resulting insulation value is somewhere between R30 and R35. So in the case of the OUTHOUSE below, your nethery regions wouldn't get cold. 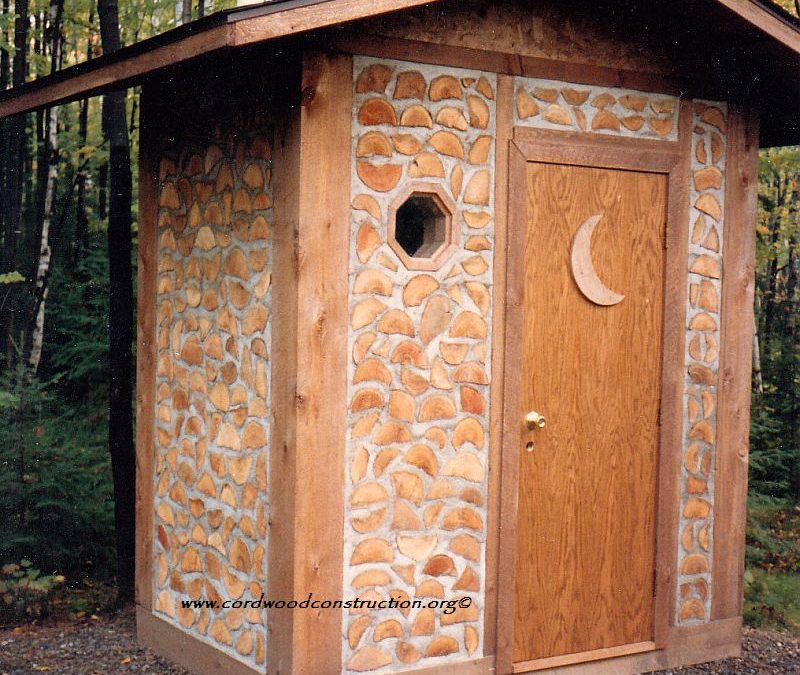 CORDWOOD EXAMPLES and BUILDING EXPERT SITES CAN BE GOOGLE-SEARCHED. MANY OUT THERE.

One of the reasons the Tweedies chose the stackwall method was because it allowed them to use a quantity of old electric power line poles they had stockpiled in the yard. The poles were acquired from the provincial power company at no cost when it replaced its 70-year-old poles with new.

“The poles were cedar,” Bob explains, “and the wood was well seasoned and cured. Of course, the bottom six feet of each pole had to be discarded because it was treated with chemicals against rot. But the rest was exactly what we needed.”

Traditionally, stackwall construction uses the whole round of log, which results in a polka-dot sort of design. Bob doesn't like that because, he says, in every round you'll find a pie-shaped crack that has to be filled either with mortar or some type of fibre-gum material. Another problem with whole rounds is that if the wood isn't completely dry or aged when mortared in, the logs will eventually shrink and loosen in the concrete, leaving unattractive gaps.

To eliminate these potential problems, Bob split his wood before laying it into the concrete and placed the pieces with no more than one to one-and-a-half inches of mortar between. Another reason he likes the split wood is that builders can be as artistic as they want with the positioning of the wood blocks.

Bob began his stackwall project by building a pole-shed frame the size of the proposed addition, sinking the poles four feet into a concrete footing, and adding a rough floor and a roof. Twenty-inch wide (the total thickness of both walls plus insulation) box frames for windows and doors were put into position and anchored with wood braces, as were all the corners. Then, once the cedar poles had been sawed into six-inch lengths with a chainsaw, and split, Bob was ready to construct the outer stackwood walls.

Mortar – a mix of masonry cement, Portland cement, masonry sand and water – was prepared by the wheelbarrow-ful, each barrow being good for about one-and-a-half hours of work. Though the addition comprised three 16 by 16-foot double walls, only ten cedar poles were required. It took Bob and Bonnie about two-and-a-half days to complete each wall. Bob experimented a little while building the outer walls. “I tried adding sawdust to the concrete mix,” he says. “Some claim it keeps the concrete from cracking, but I haven't noticed any difference other than in texture.”

Bonnie says they learned a lot about working with the mortar by trial and error. “For instance, we found the best way to deal with cement oozing out between the logs was to smooth it with your hand (wearing rubber gloves, of course). Once construction was finished, any mortar material that had gotten onto the logs rubbed off easily with a wire brush.” When the outside walls were done, Bob went inside and pounded six-inch spikes into the wood pieces, staggering them over the entire inner wall. On the spikes, he hung sheets of rockwool insulation, pressing the batts onto the nails, then pulling them back slightly. He was pleased at how snugly the insulation material attached.

The next step was to cover the insulation with standard vapour barrier material and put the electric wiring into place. Bob notched out spaces in the logs for all the electrical socket boxes and made allowance for the electric baseboard heaters that would eventually be installed. During construction, when he came to a socket box location, he mortared it in and continued on with the wall.

Once all the walls were complete and the concrete dry, Bob and Bonnie cleaned and polished the inner surfaces with an electric cup grinder equipped with a wire brush fixed on an angle. Then they sealed the walls with a spray varnish to give them a satiny patina.

The Tweedies were so happy with the results that they added a second addition a few years later, exactly like the first.

“Stackwall rooms are very easy to heat,” Bob says. “The R-value is tremendous. One reason is because the insulation is continuous with no seams or spaces, whereas in regular two-by-four construction you have a strip of wood, insulation, a strip of wood, and so on.”

“To give an idea of how heat efficient stackwall construction is,” he goes on, “the year we were doing the family room addition, by Christmas all we had up were the outside walls, insulation and vapour barrier, and a plywood floor. Even so, one electric heater was enough to make the room cozy and warm enough to have the whole family in for Christmas dinner.”

Other characteristics the Tweedies like are the fact that the stackwall rooms are quiet and soundproof. “Sound seems to be absorbed,” Bonnie says. “And we find the natural colour and texture of the logs very relaxing.” As well, she adds, the walls are very photogenic and always come out looking good in photographs. She thinks it's because light doesn't bounce off the wood and cause glare.

Books written on the subject of stackwall construction point out that structures built this way provide a healthier environment and more constant climate than others. It has to do with something called the “ambient moisture” of wood. Wood, it seems, has a moisture capacity of about 20 percent. When there is excess moisture in a room, wood absorbs it and releases it back into the room gradually as the atmosphere dries. Bob says the ambient moisture factor probably explains why after a shower you never see moisture on the walls of the stackwall room located next to the bathroom.

There are drawbacks to stackwall construction. Bob says it's a very labor intensive way of building. “You have to have a good back,” he comments wryly. “On the other hand, you don't have to be a professional carpenter to build this way.”

There are two books on the subject of stackwall/cordwood masonry construction that Bob Tweedie consulted frequently and recommends for prospective stackwall builders. They are:

Darlene Polachic is a Saskatchewan-based freelance writer who is interested in good health and nutrition.

Now, a dessert for your eyes, an amazingly beautiful, spiritual Medieval English home in Wales. This would be easy to build. Cost this fellow 3thousand pounds, is that like 5k? HUGE, well fitted, and very pleasant on the eyes.  Ya have a feeling  local codes would allow this?

<==== BACK TO HOW TO LEAVE YOUR CHILDREN WELL OFF, MEANING with AN INHERITANCE

<===BACK TO THE SURVIVE ANY FUTURE DISASTER


<===BACK TO WHAT'S IN THE FUTURE FOR NORTH AMERICA?

<===BACK TO THE COUCH POTATO ACTIVIST'S  METHOD FOR EVOLVING WASHINGTON D.C

<== BACK TO  ANITA SANDS WEBSITE  7,000 FREE SEMINARS you can republish free, attract ad revenue to your site. $ ALL YOURS

<==== BACK TO THE MONEY SECRETS and PATH TO WEALTH INDEX PAGE

<==== BACK TO COTTAGE INDUSTRIES YOU CAN DO ARCHIVE

<==== BACK TO THE FARMING/ GARDENING OR RURAL FOOD GROWER