DOES YOUR AREA HAVE THE DEADLY Parking Lot Effect? (CONCRETE spread over the entire LAND, TREES GONE!)     By Mark Clayton    The Christian Science Monitor 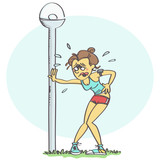 Spewing from factory stacks and car tail pipes, carbon dioxide is the poster child of "greenhouse gases." Most scientists long ago concluded that CO2 is the single biggest cause of climate change and that cutting its output is the best way to slow global warming.  So why are a tiny but growing number of atmospheric scientists taking a hard look at parking lots, paved urban streets and the TREES that they replaced? Because, they say, land-use changes have at least as much, and perhaps even greater, impact on climate change than CO2. It's a radical idea that has heated up the scientific community and is prompting a wider look at the forces behind climate change. The effect on public policy could be enormous.

Do massive asphalt and concrete "urban heat islands" like Houston or Atlanta really help ratchet up the global thermostat? What about huge tracts of farmland like those that span the Midwest?

Eugenia Kalnay thinks these aberrations are C02 factories and will kill our grandchildren and are sickening US today. Her research into the impact of land-use changes on global temperature is getting attention from other scientists, even if this debate hasn't exactly leaped into the public arena yet.

Earth's surface temperatures have risen about 1 degree F. in the past century with faster warming in the past two decades, the National Academy of Sciences reports. The 20th century's 10 warmest years all occurred in the last 15 years of the century.

But according to Dr. Kalnay's study, published in the journal Nature last spring, urbanization, agriculture, and other human changes to landscapes in the US - quite aside from CO2 - account for as much as 40 percent of the temperature rise over the past 40 years - much larger than previously believed. That could make it a contender for CO2's crown.

Kalnay, a University of Maryland researcher, was director of environmental modeling at the National Weather Service from 1987 to 1997. She oversaw development of computer models for the now ubiquitous three- to five-day forecasts.

But it is her recent research that struck a chord with the scientific community. Kalnay and coauthor Ming Cai have received a huge amount of both praise and criticism. "We were both taken aback that instead of the paper going quietly, we got hundreds and hundreds of comments and questions," she says.

Now Kalnay's research, joined by the work of a growing number of other scientists, has intensified debate over the relative strength of "climate forcing" factors.

Recent studies show that deforestation in parts of Africa is curbing rainfall in the once-vital Sahel zone bordering the Sahara desert. Changes in forest cover have also been shown to affect rainfall and climate far beyond the Amazon Basin. Still others have shown that planting trees can actually increase the planet's temperature if done in the wrong climate zones. Planting them in concrete cities could FIX the planet's C02 problems.

LEARN WHICH TREES TO PLANT NEAR CONCRETE: https://www.hunker.com/12003867/trees-to-plant-near-concrete

"Impacts of human-caused land changes on climate are at least as important, and possibly even more important, than those of carbon dioxide," says Roger Pielke Sr., professor of atmospheric science at Colorado State University and past president of the American Association of State Climatologists. His group voted in 2002 to issue a statement almost unanimously concurring that climate changes are more complex than CO2 changes and include land use. By contrast, the American Geophysical Union issued a statement maintaining CO2 as the key factor.

Dr. Pielke and others argue that land-use changes in a region may have significant effects thousands of miles away - not unlike the El Niño effect in which warming zones of the Pacific Ocean force droughts and weather changes worldwide. Cuz the CLIMATE "BLOWS"....======> PUFF!

That's still theory, of course. Skeptics point out that only 29 percent of the earth's surface is land - and only 1 to 2 percent is urbanized. Another 40 percent of land has been modified by agriculture and deforestation, Pielke says. So can the regional land-use tail really wag the global dog?

Not according to Alan Robock, an editor of the Journal of Geophysical Research: Atmospheres. He's also seen no uptick in studies of land-use impact on climate in scientific literature he's read.

"Everybody realizes modifying land surface is important locally," says Dr. Robock. "If you're talking globally, though, CO2 is the dominant way humans cause climate change."

Still, the view that human changes to the landscape are a factor driving climate, too, is gaining some traction in powerful corners of the scientific community. A report by the National Academy of Sciences due later this year will examine the warming effects of non-CO2 agents: aerosols, solar variability, and land-use changes.

"The public does not hear too much about this, because all the climate-change treaties have been focused on CO2," says Daniel Jacob, a Harvard University professor of atmospheric chemistry who chairs the panel writing the report. "For a long time it's been really hard to communicate these other factors to the policymakers, mainly because it's difficult to find the proper currency for them."

The impact of such change would begin first with global climate modelers, like Robert Dickinson, president of the American Geophysical Union. Dr. Dickinson is working to include more detailed effects from land-surface changes, aerosol, and soot in his climate model. He says one of his graduate students is pursuing a surface-temperature study of China. But like many, he still maintains that CO2 is the dominant force in climate change.

Kalnay's research is providing ammunition for some private groups to argue that global warming is a myth. In an editorial last June, the Center for the Study of Carbon Dioxide and Global Change argued that Kalnay's work showed that the impact of CO2 was overstated. "The warming of the past century or so was nothing more nor less than the natural recovery of the earth from the global chill of the Little Ice Age," the Tempe, Ariz., nonprofit reported.

Such conclusions irk Peter Frumhoff, global environment program director for the Union of Concerned Scientists in Cambridge, Mass. "Just because new research shows there are other factors to pay attention to [beside CO2, that] doesn't mean there's any less reason to pay attention to greenhouse gases," he says.

Kalnay is undeterred. Having completed her temperature study of the US, she is working on a global analysis of 50 years of temperature data. Already, early results from South America support her conclusions. "Greenhouse gases are undoubtedly very important," she says. "But the second cause for climate change is the way we are using the land surface."

Our POSTER is ANITA SANDS HERNANDEZ, Los Angeles Writer, Futurist, mother of 4 and career Astrologer. Catch up with her websites  TRUTHS GOV WILL HIDE & NEVER TELL YOU, also The  FUTURE, WHAT'S COMIN' AT YA which is where you are now...! FRUGAL LIFE STYLE TIPS,  HOW TO SURVIVE the COMING GREAT DEPRESSION, and Secrets of Nature, HOLISTIC, AFFORDABLE HEALING. Also ARTISANRY FOR EXPORT, EARN EUROS... Anita is at astrology@earthlink.net ). Get a 35$ natal horoscope "my money/future life" reading now + copy horoscope as a Gif file graphic! No smarter, more accurate career reading out there!

<=== BACK TO ENRON PLANET, the ORIGINAL BACILLUS OF THE RECESSION! A TOTAL DOOMSDAY SCENARIO by BUSH 1&2

<===BACK TO THE TRUTH GOV WILL NOT TELL YOU, WEBSITE


<===BACK TO GOOD MONEY IDEAS FOR US POOR PEOPLE


<===BACK TO PORTAL to THIS JOURNALIST'S FULL "REALITY 101" WEBSITE

<===== BACK TO THE ACTIVISM WEBSITE. Let's make these complaints an ISSUE FOR "THE FIX"

<===== BACK TO JERRY'S REFRIGERATOR & THE TIN FOIL HAT CONSPIRACY WEBSITE