SAUDIS ---THE BEST AT DRILLING, (using refugee slaves,) but THE WORST FRIENDS AMERICA COULD HAVE 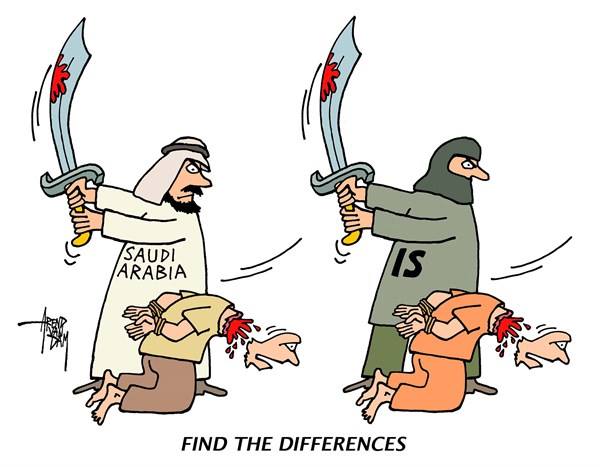 AMERICA is experiencing some super bad KARMA as BLOWBACK from its of two hundred years of colonizing third world countries, first genociding the American Indians, then smashing the Hawaiian Islands and the Phillipines, Puerto Rico, Panama, FLATTENING Vietnam, Laos and Cambodia, --Taking over Iran with the Shah, Wreaking wars in Afghanistan, and COVERT genocidal actions strangling  Nicaragua, Guatemala and Chile, ....Now Going for the MIDDLE EAST, Iraq, Libya, Yemen, Syria -- failing at every quarter yet incurring this huge BLOWBACK. (At this rate, GUARANTEED, one day our own young Americans will know the HELL OF HAVING TO GO TO WAR AND KILL CAVEMEN in THIRD WORLD COUNTRIES, as well as ENDLESS RECESSION here at home, so the suppressive HEEL of UNCLE SAM's pitiless BOOT upon our necks as ENDLESS TAXES. THE  USA kicks everybody until they are submissive slaves but really it is turning you me and the INVADED ones into eternal enemies of the AMERICAN PEOPLE. Everybody hates us and wants payback.

THE WORST of our public friends, private enemies and the most dangerous may be the hooded hoods, the OILY oligarchs from SAUDI ARABIA and QATAR whom we turned into a bunch of rich killers. In return they call us 'shiftless whites.' Dumbed down jerks dizzied from orgiastic immoral living who can't make a living without exploiting colonies. They call us Jew lovers who can't or won't flatten the brilliant, hard working state of ISRAEL. We aren't perfect but we don't cut off heads at midday in the city park. We don't betray friends. But we ARE FRIENDS with criminals like the SAUDIS. OUR BAD!

Do American institutions REALLY want to snuggle up with Saudi Arabia and its Dark Age values? Don't you just LOVE those HEAD CUTTING OFF CEREMONIES in the CITY PARK? Everybody watch this  FUN EXECUTION IN PUBLIC! Some  guy called the King a SLAVE DRIVER cuz the country has all those starving refugees working 80 hr weeks with no way to write home or get out. OFF WITH HIS HEAD See http://newsjunkiepost.com/2013/10/02/saudi-arabia-and-qatar-kingdoms-of-slave-labor-human-rights-abuses/

These AMERICAN "FRIENDS OF SAUDI ARABIA" (Oil men all,) had better get with the program & think this one through. WHY? Because PERMITTING THIS BEHAVIOR is letting the ENEMY IN THE GATES. An unmannerly ENEMY. WHEN? NOW or VERRRY SOON!  A tidal wave of money from Saudi Arabia  as well as Qatar, the United Arab Emirates, and Kuwait” is crashing into these shores and buying up American assets. What do the SAUDIS WANT TO OWN THAT AMERICANS HAVE? Something Gulf State hasn't ONE OUNCE OF. FARMLAND! They are buying it from farmers whom the Drought in Arizona and California bankrupted a million acres a year. SEE THIS SITE 20 seconds to load

http://www.thesleuthjournal.com/saudis-have-been-buying-up-drought-stricken-american-farmland/ That 20 second load time keeps ROBOTS out. So I didn't make it a live link. CUT AND PASTE it, please.

Americans should expect no free lunches from Sheiks in spite of all that OIL we BOUGHT from the SAUDIS since LAWRENCE OF ARABIA first marched thru there kissing camels. We let these SAUDI bullies enslave the poor refugees from a dozen failed states and mistreat them horribly.

This particular, failed government has paraded around in its Rolls Royces and bought America's silence and U.S. implied acquiescence to their barbaric practices which makes AMERICA the world's greatest ENABLER and a total amoral NINNY PUSHOVER cuz the Sheiks  are now so rich from OUR WHITE HOUSE and OIL MEN being in cahoots that they an now afford to buy up our children's LEGACY! And we're lettin' them do it.

Ya think not? OK here are the numbers:  The United Arab Emirates, a tiny enclave of a half million natives and no rule of law has purchased significant chunks of American banks (including Citibank), ports, and airport facilities. Choke hold points on U.S CITIZENRY.

Kuwait, the country we saved from Saddam's clutch, is deploying a war chest of $300 billion as its Neanderthal Parliament strives to reinstate flogging and decapitation and to annul the recently granted right of women to vote. We're paying them to become NEANDERTHALS!

And the mother of Islamo-fascism, Saudi Arabia, where 200 senior royals of the ruling family are playing with several billion each and buying up stakes in strategic companies such as Disney and Apple, and Citibank, too, and using the rest of the oil bonanza to fund madrassas, militant mosques, and theological
institutes across America and Europe.

The money-seduction tactic has worked in Britain well over the past three decades, transforming whole segments of the British Muslim population into Wahhabi militants, amply evidenced by recent subway bombings as well as the number of women in burkas strolling through the streets of London. The purchase of the British government's silence was dramatically evident in Prime Minister Blair's decision to shut down an investigation into allegedly huge bribes paid to the Saudi royal family.

As I said, expect no free lunches. To be sure, this country's economy benefits immensely from foreign investments. And in the past half century, the biggest have been from Europe, Canada, Britain, Japan, and Australia  which all share the fundamental value of civility. A flood of money from fascist societies is
a different ball game.

In the past few weeks alone, several examples demonstrate the values that the empires of darkness are forcing us to swallow.

The second- and third-period classes in Saudi Arabian schools were suspended recently "in solidarity with Palestinian brotherly people" In directives to 5 million students, the Saudi deputy education minister, Mohammad al-Roweishad, told them to spend their liberated 90 minutes writing about Saudi Arabia's fight against Zionism "on behalf of Palestinian Arabs."

In a country where preachers routinely refer to Christians and Jews as monkeys and pigs, it takes little imagination to figure out what is in those essays. A French teenager, the son of a French hotel manager in Dubai, was abducted by three Emirati men, raped, and dumped in the desert outside of Dubai. Police and the medical authorities responded to his parents' protest by threatening to jail the boy as a homosexual, until President Sarkozy of France personally interfered to demand a real investigation. In the glare of world publicity, Western apologists explained that Bedouin traditions in these closed all-male societies do not regard pedophilia as a crime and that teenage white males are a kind of fair game. Indeed, it is a matter of record that countless members of domestic staff, male and female, are routinely raped in Arabian homes and deported or jailed when they complain.

In a now world-famous case, a 19-year-old Saudi Arabian woman and her boyfriend were pounced upon in a car and  both raped by seven men. The Saudi so-called justice system condemned her
to 90 lashes. When her lawyer protested this barbaric sentence, he was disbarred and her sentence augmented to 200 lashes.

Sadly, while the American press and civil establishment revolted, the  White House, Congress, and, above all, our business establishment looked away, suggesting how heavy a price is exacted for a
Bedouin greenback.

We often mouth off the word "failed society" without fully comprehending that in the Arabian Gulf, the term refers to a veritable kingdom of darkness for women, men, children, and minorities.

The huge migration of money that has followed Western capitalist systems has brought progress and modernity in its wake. But Arabian oil money imported by Citibank and other titans of American
industry deeply compromises our values and buys our silence.