In response to the astounding revelations arising out of the hacked Climate Research Unit
or CRU emails, ---Senator Jim Inhofe has stated that unless something is
done within the next seven days, he will lead the call for a rigorous
investigation into mounting evidence that top climate scientists
conspired to manipulate data to hide evidence of global cooling while
engaging in academic witch hunts to eliminate scientists skeptical of
man-made climate change. 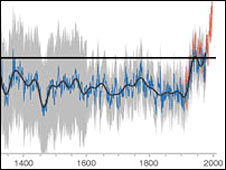 They are alleging a conspiracy to scare us about something that isn't happening!

Speaking on the Americas Morning Show earlier today, Inhofe, Ranking
Member of the Senate Environment and Public Works Committee, said the
new revelations proved what he has been warning about for over four
years, that politicians and bias-driven climate scientists affiliated
with the UN IPCC have been fraudulently "cooking the science" to
conform to their agenda.

"If nothing happens in the next seven days when we go back into
session a week from today that would change this situation, I will
call for an investigation," said Inhofe. ?Cause this thing is serious,
you think about the literally millions of dollars that have been
thrown away on some of this stuff that they came out with.?

Asked what he would call for an investigation of, Inhofe responded,
"On the IPCC and on the United Nations on the way that they cooked the
science to make this thing look as if the science was settled, when
all the time of course we knew it was not.?

Meanwhile, even some pro-man made global warming advocates have
conceded that an investigation is necessary.

Bob Ward, director of policy and communications at the Grantham
Research Institute on Climate Change and the Environment at the London
School of Economics, told the London Guardianthat only a rigorous
investigation could clear the names of those accused of manipulating
the data, admitting that the emails ?created the impression of
impropriety,? which is a lot further than most have gone in accepting
the damning nature of the hacked data.

Indeed, the British Met Office performed the equivalent of a child
sticking his fingers in his ears by merely attempting to dismiss the
emails altogether, without even explaining what was meant when
scientists at CRU talked about pulling ?tricks? to ?hide the decline?
in temperatures.

A spokesman at the Met Office, which jointly produces global
temperature datasets with the Climate Research Unit, said there was no
need for an inquiry. ?If you look at the emails, there isn?t any
evidence that the data was falsified and there?s no evidence that
climate change is a hoax. It?s a shame that some of the sceptics have
had to take this rather shallow attempt to discredit robust science
undertaken by some of the world?s most respected scientists. The
bottom line is that temperatures continue to rise and humans are
responsible for it. We have every confidence in the science and the
various datasets we use. The peer-review process is as robust as it
could possibly be. It?s no surprise, with the Copenhagen talks just
days away, that this has happened now.?

As James Delingpole of the Telegraph highlights, alarmists are not
going to be effected by the scandal, because they will allow nothing
whatsoever to corrupt their religious belief system. ?They?ve made up
their minds and no quantity of contrary evidence, however devastating,
is going to shake their considered position of ?Nyah nyah nyah. Got my
fingers in my ears. Not listening. The world IS warming and it?s man?s
fault. Must tax carbon now?.?

However, there seems little doubt that this bombshell will go a long
way to derailing, or at least delaying the agenda for a global carbon
tax that will be collected by the very same elitists aggressively
pushing the fraud of global warming.

Paul Joseph Watson is a frequent contributor to Global Research.

It seems that while scientists who accept funding from oil companies are branded as bought-and-paid-for shills, those financed by renewable energy interests remain unchallenged authorities in their fields. Words cant adequately express my astonishment.

Amid the thousands of files apparently lifted from Britains Climate Research Unit (CRU) last week sit two documents on the subject of the units funding. One is a spreadsheet (pdj_grant_since1990.xls) logging the various grants CRU chief P.D. Jones has received since 1990. It lists 55 such endowments from agencies ranging from the U.S. Department of Energy to NATO, worth a total of £13,718,547, or approximately $22.6 million. I guess cooking climate data can be an expensive habit, particularly for an oft-quoted and highly exalted U.N. Intergovernmental Panel on Climate Change (IPCC) chief climatologist.

But its actually the second document (potential-funding.doc) that tells the more compelling tale. In addition to four government sources of potential CRU funding, it lists an equal number of "energy agencies" they might put the bite on. Three -- the Carbon Trust, the Northern Energy Initiative, and the Energy Saving Trust -- are U.K.-based consultancy and funding specialists promoting "new energy" technologies with the goal of reducing carbon dioxide emissions. The fourth -- Renewables North West -- is an American company promoting the expansion of solar, wind, and geothermal energy in the Pacific Northwest.

Needless to say, all four of these CRU "potential funding sources" have an undeniably intrinsic financial interest in the promotion of the carbochondriacal reports CRU is ready, willing, and able to dish out ostensibly on demand. And equally obvious, Jones is all too aware that a renewable energy-funded CRU will remain the worlds premiere authority on the subject of anthropogenic global warming (AGW) despite any appearance of conflict.

And yet, no such latitude has ever been extended to scientists in the skeptical camp.

For instance, when MITs Richard Lindzen delivers one of his trademark brilliant presentations leading to the conclusion that climate sensitivity for a doubling of CO2 is about 0.5°C, not the 1.5°-5°C predicted by IPCC models, all we hear from alarmists and complicit media types is that the professor once charged oil and coal interests $2,500 a day for his consulting services and is therefore an unreliable big-oil hack.

Or when S. Fred Singer challenges the IPCC to explain whether water vapor and clouds represent positive or negative feedback, or stands before a graph depicting temperatures decreasing over the past ten years while CO2 climbed and declares that the relationship is meaningless, his words are similarly dismissed based solely on the fact that he has received funding from ExxonMobil.

Lets set aside the fact that Lindzen had actually accepted a total of $10,000 in expenses and expert witness fees from such interests on the day he ceased such activities two decades ago. And that Singer has received only $20,000 from ExxonMobil. And that alarmists outfund climate by several orders of magnitude, which leads to the artificial expansion of the number of scientists who appear to support alarmist views. And even that monies paid to either side of the debate have zero impact on the science of whether or not 20th-century warming was caused or is exacerbated by man-made CO2 emissions.   And dont get me started on carbon-millionaire Al Gore.

The issue is this: Just how is it that funding from renewable energy interests evades charges of bias, yet subsidies from traditional power entities scream bloody conflict when each is equally friendly to the recipients cause?

As with all things AGW, the alarmist quick-draw canard that the science is settled but for a few outliers in the fossil fuel industry's pockets is quickly losing whatever civic support it may have had. And the scientific subterfuge exposed last week by the CRU emails and documents represents but the latest of many recent outrages sure to accelerate the ongoing public awakening to the hoax that has been perpetrated upon them.

In the broader scheme, the credibility blow the IPCC will likely suffer from its top acolytes -- senior authors and editors -- bandying data-manipulation-revealing e-mails will weaken and perhaps ultimately break the AGW orthodoxy spine erected by its politically-charged assessments. And that can only serve to further declaw their fellow alarmists and media minions -- which of course would be nothing short of stupendous.

For as Lord Christopher Monckton emphasized in his rousing speech to close the second International Conference on Climate Change in New York City last March:

And it has become abundantly clear that it is not, nor was it ever, the AGW skeptics who were the liars. Or the cheaters.   Or the bought-and-paid-for hypocrites.

POSTER'S NOTE: Then why the hue and cry from BBC with graphs (the one at top was on their page,) proving how HOT it's getting and why does Al Gore keep saying that there is a dangerous crisis? There's no cui bono for being a GLOBALWARMING freak, it's not like they're selling air conditioners" I sent those words to a knowledgeable Brit netpal who answered:

The Cui bono: A win-win for criminals like Al Gore who will personally
make hundreds of millions via the carbon tax credit fraud. The
investment sharks on Wall Street, London and other places stand to
gain billions; it is a new money-making ponzi scheme to 'stimulate'
the financial sector. Thousands of new businesses will be set in
motion to skin the milk from consumers and businesses based upon
carbon credits. The governments are backing it because of this 'new
stimulous' package to kick-start economies. And so the BBC is part of
the status quo; they get their orders from the government!!!

With criminals like Al Gore, Obama, Kissinger and others getting a
Nobel Peace Prize it totally discredits the Nobel Committee, and
proves that they are part of the criminal reptilian force."

That's  the reptilian plan: They then move in and buy up
all the profitable businesses, and hey presto! they would then 'own'
the whole world, which is their plan; that was how they engineered
WW1, the Great Depression and WW11; as a consequence of each of those
'enterprises'  they grabbed more industries and banks; that is why
there are more non-reptilian Zionists in western governments who sold
their souls to the puppet masters for a slice of their evil cake. But,
they will not achieve their ultimate objectives!!!"