HUH? WHO SEZ I CAN'T TORTURE? --I had to get to the WHITE HOUSE to be able to drown an Arab  187 TIMES, but the wait was worth it. I loved every second of it. Oh yeah, People made a fuss but my in-house White House lawyers Byebee and Yoo both said I legally could do it!  Yep, BYBEE DO! And YOO TOO.

BUSH: HUH? I didn't say you allowed me, as if you were anyone. YOO DID! YOO SAYS I CAN TORTURE all I want.

NOT IF YOO actually SAID IT!

I DID NOT say it!

NOT YOU, YOU IDIOT, YOO! YOO SAID I CAN TORTURE! It's In the MEMO!

I NEVER SENT YOU A MEMO!

YOO DID!
I DID NOT.
NO NOT YOU, YOO!!
WHO DID?
YOO DID.
YOU WHO?
Now you're yodeling? Hell, I am so glad we got that killer FLU UP and running so I don't have to go thru THIS crap ten times a day! You plebes gonna be extinct, soon. Fort dix sez so!

IT APPEARS GEORGE DUBYA BUSH HAD A LICENSE TO KILL! 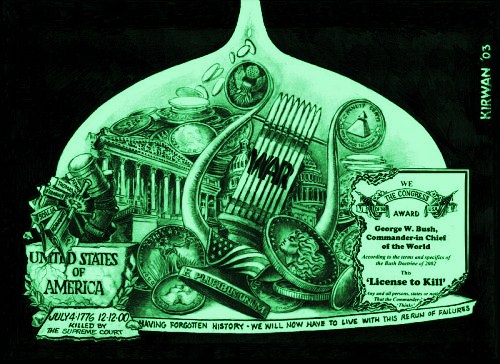 The OBAMA Justice Department is pretending to investigate the creepy pair of lawyers BYBEE AND YOO --whose memos gave the Bush Administration the legal support it needed for waterboarding and other brutal interrogation techniques. We are "examining whether the legal advice in these memoranda was consistent with the professional standards that apply to Department of Justice attorneys," H. Marshall Jarrett, counsel for the Justice Department's Office of Professional Responsibility, wrote to two Democratic senators in February.

The torture memos from 2002 were mainly the work of Jay Bybee, then head of the Office of Legal Counsel (OLC) and now a federal appellate judge in San Francisco, and Bybee's deputy, John Yoo, who has since returned to teaching law at the University of California, Berkeley. This month the Pentagon released a long-rumored torture memo from 2003 written solely by Yoo, which is even more adamant in its embrace of unfettered presidential power.

The memos are an abysmal piece of work, but they had great value to the President. Dismissing the Geneva Conventions and other law, they used the veneer of serious legal scholarship (abundant footnotes, many citations, long dense paragraphs) to create an aura of legitimacy for near-death interrogation tactics and unrestrained executive power. The memos had high credibility because they came from the OLC, the legal brain trust for the executive branch and (until then) the gold standard for legal acumen.

The press tends to overlook the lawyers when scandal breaks, focusing instead on their clients. That's understandable, but in public and commercial life no serious move is possible (no corporate maneuver, no new financial instrument, no war, no severe interrogation tactic) without legal approval. Even if the advice proves wrong, the client, if sued or indicted, can claim reliance on counsel.

When lawyers in private practice mess up, they face serious jeopardy. They can be fired, sued for malpractice, disbarred or prosecuted. Yoo and Bybee face no such risks. The President won't protest. He got what he wanted. And while a state disciplinary body can investigate, that is unlikely without Justice Department help.

The Justice Department recognized the incompetence of the torture memorandums when Bybee's successor, Jack Goldsmith, retracted an August 2002 memo that had construed the Convention Against Torture and the federal statute forbidding torture to permit interrogation tactics just shy of homicide. And that memo was actually an improvement on the OLC's earlier work, which, in advising on "the effect of international treaties and federal laws on the treatment" of detainees from Afghanistan, entirely overlooked the torture convention and statute.

In his book The Terror Presidency, Goldsmith, now a Harvard law professor, writes that the torture memos had "no foundation" in any "source of law" and rested on "one-sided legal arguments." They were valuable to the Administration nonetheless, Goldsmith says, because the CIA saw one of them as a "golden shield" against criminal prosecution of agents who had used harsh interrogation techniques.

Well, anyone can make a mistake, right? And don't lawyers disagree all the time? Of course, but that's not the point. The present criticism cites the utter shoddiness of the work. Take another example. Although the OLC memos broadly construed presidential power in foreign affairs, they ignored the Supreme Court's landmark 1952 "steel seizure case," which greatly restricts that power and contradicts the OLC's expansive claims. It would be like advising a client on school desegregation law and ignoring Brown v. Board of Education. Yale law dean Harold Hongju Koh called this omission "a stunning failure of lawyerly craft" and "a stain upon our law and our national reputation." A virtual LICENSE TO KILL!

How could two really smart guys authorize torture using "one-sided legal arguments" that have "no foundation" in law? How could they be guilty of a "stunning failure of lawyer-ly craft"? The sad answer seems to be that they knew what the President wanted and delivered: torture is OK if you call it something else. Detainees are outside the protection of due process and civilized law. The President's authority is close to absolute. Anyway, no court can review him. (On this last point, the Supreme Court disagreed.)

This incompetence is especially serious because of the conduct it enabled. If a private lawyer gave such a lopsided and wrongheaded analysis to a business client, he'd be history. Lawyers advising private clients about to make important decisions (a "bet the company" kind of decision) meticulously analyze all sides of a question so the clients can assess risk and choose wisely.

The client deserved better, and that raises another issue, the most troubling. Who was the client? The lawyers told the President what he wanted to hear, but the nation was their client, and its sole interest was in thorough and independent legal analysis. Neither the President's political agenda nor the authors' views of what the law should say can be allowed to slant the OLC's work. So maybe the best and brightest lawyers got it so wrong because they forgot whom they served. Maybe they acted politically, not professionally. If so, we are dealing with a perversion of law and legal duty, a betrayal of the client and professional norms, not mere incompetence, which would be bad enough. Whatever the reason, Jarrett should find that this work is not "consistent with the professional standards that apply to Department of Justice attorneys." Jarrett must hold the lawyers accountable if he means to restore OLC's reputation and vindicate the rule of law.

by Stephen Gillers --was in The Nation Mag

Our POSTER is ANITA SANDS HERNANDEZ, Los Angeles Writer, Futurist and Astrologer. Catch up with her websites  TRUTHS GOV WILL HIDE & NEVER TELL YOU, also The  FUTURE, WHAT'S COMIN' AT YA! FRUGAL LIFE STYLE TIPS,  HOW TO SURVIVE the COMING GREAT DEPRESSION, and Secrets of Nature, HOLISTIC, AFFORDABLE HEALING. Also ARTISANRY FOR EXPORT, EARN EUROS....* Anita is at astrology@earthlink.net ). Get a 35$ natal horoscope "my money/future life" reading now + copy horoscope as a Gif file graphic! No smarter, more accurate career reading out there!

<==== BACK TO THE SHOW BUSINESS ARCHIVE, for Producers, Documentary makers and WRITERS

<====HOW TO TINKER WITH OTHER PEOPLE's BRAINS - FREUD but call it TANTRUM YOGA. Legal that way.