WW III has started. BESLAN SCHOOL CHILDREN MURDERED US want to drive Russia out of the Caspian and Caucasus regions so HOW BETTER THAN A TRAGIC FALSE FLAG OP TARGETING RUSSIAN TIES TO ITS SATELLITES

Informed Sources say it was done by a CIA OPERATIVE on orders from WASHINGTON!

THE HORRORS OF BESLAN 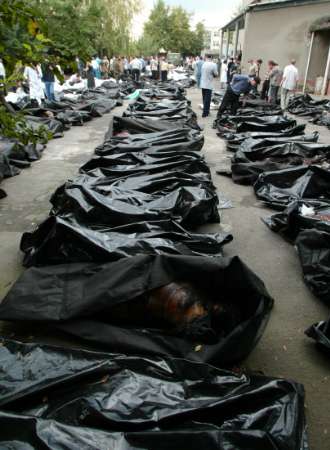 The group that massacred 170 children and 130 adults in Beslan were led by CIA operative Shamil Basayev and we find that they took their orders from abroad. There is no question this is an extension of Anglo-American foreign policy to dismember Russia which insiders predicted 12 years ago. 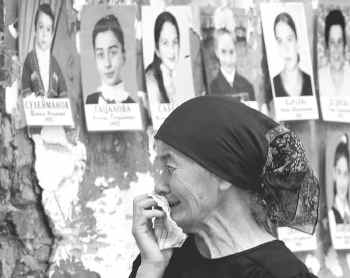 (RUSSIA is about to choose the EURO over the dollar which will FINISH US oligarchs).

Russia has retaliated by demanding that Akhmad Zakayew, now being given sanctuary in London and Ilyas Akhmadov now residing in the US, be turned over to Russia for planning and conducting the Beslan massacre.
To see more on what happened, read:
http://en.wikipedia.org/wiki/Beslan_school_hostage_crisis
In fact, Ilyas Akhmadov has political asylum in the US and receives a Reagan-Fascell monthly stipend, medical insurance and an office, from which he engages in political circles and informs the media.

The Fascell Foundation is funded by Congress through the US State Department. Their actions show they not only want to dismember Russia but they want to use the instability they have caused to access oil in the Caspian region and in the process control Georgia and Azerbaijan if you remember in the late 1980s, the revolt against the Soviet Union began in Azerbaijan.

Thus, we believe the UK and US want to drive Russia out of the Caspian and Caucasus regions effectively neutering the country. The Beslan event has driven a wedge between Ossetians, Ingushis and Chechens, which will set the Caucasus aflame. If we were not already into WWIII, we are now struggling to DRIVE ALL HER NEIGHBORS AWAY FROM RUSSIA. The elitists are about to again destroy Russia and Russians in their efforts to achieve world government. Russia has a nuclear arsenal and they have to be brought to capitulate. If they do not, the elitists will pay a high price for their efforts. The ultimate aim is to destabilize Russia politically and otherwise and plunge the country into crisis.

If you observe the western media and cut through the hot air you will see the blame is being placed on Russia not on the butchers. They know what is going on but are terrified to report it.

The elitists are very fearful as a retaliatory measure that Russia will accept euros for their oil which Saddam Hussein did and for that and other reasons he was deposed. This, of course, would destroy the dollar as a reserve currency.

Once Russia moves to the euro, and we believe they will after Beslan, Iran, Venezuela and Indonesia will follow. This would lead to a US and world depression, which is on the way anyway.

The US would have to set up protective trade barriers, manufacturing would have to reawaken and free trade, globalization and outsourcing would come to an end. We are getting close.

The Economist, an elitist mouthpiece, gave Russia a virtual ultimatum, capitulate on the Caspian oil riches or we will destroy you via inter-ethnic wars. That means Russia must get aggressive and they will.

Russia is the victim. Never did we ever think we would write these words, but that is just the way it is. New things are happening that are turning old relationships upside down. You had best reinvent your thinking or you will be left behind.

from THE INTERNATIONAL FORECASTER

Our POSTER is ANITA SANDS HERNANDEZ, Los Angeles Writer, Futurist, mother of 4 and career Astrologer. Catch up with her websites  TRUTHS GOV WILL HIDE & NEVER TELL YOU, also The  FUTURE, WHAT'S COMIN' AT YA! FRUGAL LIFE STYLE TIPS,  HOW TO SURVIVE the COMING GREAT DEPRESSION, and Secrets of Nature, HOLISTIC, AFFORDABLE HEALING. Also ARTISANRY FOR EXPORT, EARN EUROS..* Anita is at astrology@earthlink.net ). Get a 35$ natal horoscope "my money/future life" reading now + copy horoscope as a Gif file graphic! No smarter, more accurate career reading out there!

<====HOW TO TINKER WITH OTHER PEOPLE's BRAINS for 100$ the HR. Not GESTALT OR PRIMAL but "TANTRUM YOGA"

<=== 7,001 articles you can republish for free, GET AD REVENUE, monetize on your blog.  PORTAL to the BIG LIST