THE CASE OF THE FLOATING REDHEAD

Summer’s end. The last throes of a noisy party quiet down. The torrential night’s rain storm falls into a quiet patter of polite rain drops. Like drunken party guests, corpses float out of the windows of broken houses ignoring the wreckage they leave behind. In the glade, a corpse floats dreamily in the current, hair spreading like fire colored seaweed in the orange light of dawn. The body slowly drifts down river through a beautiful, scenic parkland, past cracked buildings like failed sentries, who allowed these million dollar homes to be demolished by revelers. 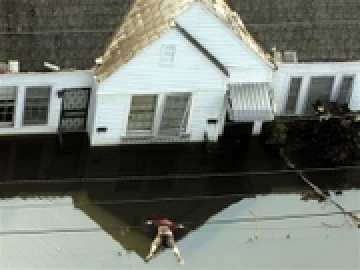 One, lonely corpse is joined by another floating in from a demolished planter’s shack, then joined by a third body, this one black, from an glen of smashed farmhouses upstream. They bob their way and bump in the current like three old friends having a chance meeting. Soon there are hundreds of bodies flowing eerily in the pattering raindrops. Cuckoos call in the woods, ‘cuckoo, and cuckoo’. YES, SOMETHING Is VERY CUCKOO about all this.

When you have a crime, there will be signals beforehand from the criminals but these little signals are visible only to those who have the eyes and ears. They may come as the voice of authority giving precise instructions to an entire city that there be an immediate evacuation of the area because something wicked this way comes. Who gave that message? That may be the very person WHO DUNNIT. Or at least his superior’s superior but the chain will run up the tree and give the villain away.

WHO was the final spider at the center of the web who DUNNIT? Sherlock Holmes has taught us, If you want to be a detective, follow one rule: “If you’ve ruled out everything impossible then what’s left is what is possible. And that is your answer.”

Facts. The ten worst storms of the past century have never touched New Orleans. A hundred years ago, a category 4 or 5 hit Galveston, an island off Texas. Apparently living IN the ocean is not a good idea in Texas. Every hundred years, you’re all too likely to get your wish.

Katrina the 2005 Category 4 storm --appeared to be like a mad wraith driving a Hummer at full speed toward New Orleans. A day beforehand, scientists, spying her thru their glass, asked everyone to vacate the area. That was the plan. No one was to stay. But you know people, doubting Thomases. Half of them insisted on staying as if they could hold their roof on their home with their clenched fists.

At the last moment, the storm veered, allowing the worst winds that are off on the side of any storm, (and which can be double the velocity of the center of the storm, ) to sweep right through the New Orleans historic district. Now, little known fact.Historic buildings built of huge blocks of stone would not be touched. They would be polished the way a TOOTHOMATIC cleans the fuzz off your smile. Maybe thatched roofs would fly, but they need rebuilding every fifty years anyway. The structures would hold! The historic part of town would be like a museum being dusted in Spring cleaning. Newer structures even costly homes created by modern cheapie contractors would be pulverized. Rickety apartment buildings that were in the way of a coming wave of investment would thankfully be so soggy and termite infested they’d be condemned and way would be made for the investors.

THE IMPOSSIBILITY That any of this was Accidental. The diamond of the south was N’aw arlans. The French Quarter was so full of raw, money potential that it was just begging for a remodel by a Sparkling Disneyland kind of decorator. An “Intense Renewal.” (is that title of tv. Show?) A drastic remodel. A FORCED MAKEOVER, like those tv shows where they grab you on the street and say ‘lady you have terrific potential but you’re a mess. Let us at you!”

THESIS: THE WEATHER IS BEING MANIPULATED and used BY THE GOVERNMENT to reposes a town, to get the hoi polloi out of the way. Now true, the target of all targets, the KOHINOOR DIAMOND of the tropical Eden is HAITI but the HOPE DIAMOND of the wealthiest country on the planet was l’il N’arlans! A beauty in the rough. A gem just needing a year of polishing and the target of the wealthiest scoundrels this planet has ever seen. Huh!? GWAN! PROVE IT. Let’s see some research! CLUES PLEASE!

Unless otherwise noted, this material is taken from “Special Report: TheWildland Project Unleashes Its WAR ON MANKIND”, by Marlin Brannan,Associate Editor, ‘Monetary & Economic Review’. [For anyone who would like more complete information, or further information, please either write to: FAMC, 3500 JFK Parkway, Fort Collins, CO 80525, or call them at 1-800-336-7000.]

What no one in leadership is telling you is that these areas designated to be set aside on this map will be swept of all human living and/or development, as part of the 1972 United Nations Biodiversity Protection program. This plan literally conceives of setting aside huge areas of the world where no humans can live—will be allowed to live—or work, or play. While this plan is global and is being instituted globally, we will limit our study of it to the United States. [The entire plan is published in a report entitled, “Our Global Neighborhood: The Report of the Commission On Global Governance”, Oxford University Press, ISBN 0-19-827997-3, 410 pages long. You can order from any bookstore using the ISBN Number, above.]

This plan in America is called the “Rewilding” of America. This term means to re-wild this continent. In other words, they plan to sweep aside all evidences of human endeavor, i.e., homes, businesses, structures, entire cities, allowing the land to go back to its natural state, before the wicked White Man took the land from the Native Americans (Indians). Using Presidential Directives, normally exercised through various Federal Government agencies, this “rewilding” project will be accomplished by declaring huge tracts of land completely off limits to humans. These tracts of land would be called ‘reserves’. Reserves would “include wilderness areas and national parks while inner buffer zones would permit no agriculture, no more than 0.5 miles of road per square mile of land, primitive camping, and only light selection harvesting of forests. The June 25, 1993, issue of Science magazine reports that the plan calls for 23.4% of the land to be put into wilderness (no human use) and 26.2% into corridors and human buffer zones (very limited use by humans).” [Op. Cit., Brannan, p. 2.]

This is 50% of America!!! Once you study the map, where these off-limits zones are designated, your mind will be blown by the unbelievability of it all!! You will be able to see if your area is one of those who are to swept clean of human activity, and you will be able to see where you might wind up being relocated. As I am looking at the map, I see that many entire states are seemingly set aside, to prevent any human activity at all. States West of the Mississippi River seem to be designated as nearly “Clean Sweep” states, chief of whom are:

We believe the final implementation of this plan as illustrated through this map will have to wait until the planned 66% reduction in population has been carried out. Keep this in mind as you study the facts now presented.

ACHIEVING THIS MAP THROUGH EXTREME WEATHER

How does our government—indeed, any government of any Industrialized nation—plan to achieve such a terribly restrictive and devastating population reduction and redistribution? They obviously could achieve this goal in one of several ways. PRETEND TERRORIST bombing, or fooling with the weather.

The UK/TV “news/weather” report “explains” that our weather was changing due to the fact that the “Gulf Stream” was changing course ....... i.e. the flooding was blamed on this. No mention however of HAARP or Woodpecker. just shows how blatently we are patronised with what most consider to be “ NEWS” ...........

BRINGING THE JET STREAM “DOWN TO THE DECK”

One of the capabilities of HARRP Tesla Technology is that it controls, steers, and diverts the Jet Stream. Once this capability is achieved, scientists truly are in control of our weather, because the Jet Stream steers storms. However, our research turned up one most interesting fact: scientists can bring the Jet Stream “down to the deck”, i.e., down to the ground!

Now, since your major goal is to persuade human beings to leave their land and their cities because nature had suddenly turned against them, what more perfect weapon to use than the Jet Stream on the ground? For information about the Jet Stream, go to

“a specific meaning of upper atmospheric winds blowing faster than 57

However, they may reach velocity of well over 100 miles per hour! Philippines just had over 200 miles per hour. This is engineered. Somebody wants the poor people off those beaches.

Til now, Jet Streams would reach 150 miles per hour but not over 200. That’s weather control.

Obviously, were the Jet Stream to blow consistently on the ground in speeds of 100 - 150 miles per hour, human life would be totally impossible, and people would begin to leave in droves! Therefore, we have begun to watch for instances in which such incredibly strong winds suddenly spring up. On August 12, 2002, the residents of Nickerson, Kansas, were awakened to winds blowing over 100 mph! Let us examine the news story.

CLUES - Communications in New Orleans ARE BEING JAMMED!

The behaviour of the authorities in the tragedy befallen the citizens of New Orleans sounds suspiciously similar to the Hurricane Andrew Cover-up that hit South Dade: http://www.nexusmagazine.com/articles/hurricane.html 20 Please Network...

Hmmm....the conspiracy thickens. Conspiracy or stupidity. Was there really all that gunfire, or was that disinfo. (answer.)_ SHOTS REALLY HAPPENED. It is possible that the black hurricane Victims were not shooting but a lot of MEN IN BLACK. Different.

Who Is Jamming CommunicationsIn New Orleans?

If anyone at the National Security Agency is aware of the source of the jamming, from direction finding or satellite intelligence, please discretely contact me at waynemadsendc@hotmail.comIn this case, the Bush administration cannot hide behind national security and it is the duty of every patriotic American to report such criminal activity to the press. Even though the information on the jamming may be considered classified—it is in the public interest to disclose it.

Also, the Federal Aviation Administration (FAA) is reporting that no aircraft over New Orleans have been fired on over New Orleans or anywhere else in the area. Are the reports of shots being fired at aircraft an attempt by the Bush administration to purposely delay the arrival of relief to the city’s homeless and dying poor? The neocons have turned New Orleans into Baghdad on the Mississippi.