Social Security money has been stolen by your government
Your life pension has already been spent by US GOV killing Arabs to steal their oil! 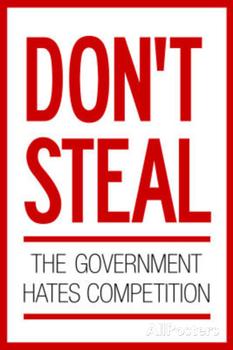 By ALLEN W. SMITH
Allen W. Smith is a Professor of Economics, Emeritus, at Eastern Illinois University.
Dr. Smith is the author of seven books and holds a Ph.D. in economics from Indiana University.

The Obama deficit-reduction commission will make recommendations for budget cuts that will then be voted on, with an up or down vote, by the lame-duck Congress.They do it every December.


Already, there is much speculation that Social Security will be one of the big targets. The rationale for cutting Social Security seems to be that, during such difficult economic times, everything should be a candidate for the chopping block, and that the public should support such cuts out of a sense of patriotism. 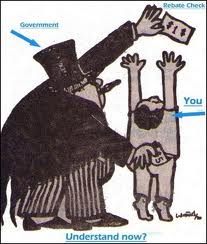 I love you. You are my GOV
TAKE IT ALL. Use it well.


The flaw in this argument is that Social Security has not contributed a dime to the budget deficits or the soaring national debt. Social Security is funded exclusively by payroll taxes (also known as FICA taxes), paid into the fund by working Americans.

In 1983, the payroll tax was increased substantially in response to the recommendations, the previous year, of the Greenspan Commission on Social Security Reform. Prior to 1983, Social Security had operated on a "pay-as-you-go" basis with each generation responsible for paying for the benefits of the generation that preceded them.

The 1983 legislation changed the nature of Social Security funding. In addition to paying for the benefits of the preceding generation, as was customary, the baby boomers were also required to pay additional taxes to partially pre-fund their own retirement.

The net result is that the baby boomers have paid more into Social Security than any other generation. Yet they are often made scapegoats and blamed for the Social Security funding problem. I am not a baby boomer, but I am very sympathetic to them. They are getting a bum rap.

The intent of the 1983 legislation was to generate large Social Security surpluses for the next 30 years that were supposed to be saved and invested, in order to build up a large reserve in the trust fund that could later be drawn down to pay benefits to the baby boomers. The 1983 payroll tax hike has generated more than $2.5 trillion that is supposed to be in the trust fund. If the trust fund actually held this amount in real assets, full Social Security benefits could be paid until at least 2037 without any changes. Unfortunately, none of the surplus revenue was saved or invested in anything. It was all spent, by the government, on wars and other government programs without making any provisions for repaying the money.

During the past 25 years, five presidents, and the members of Congress, have participated in the great Social Security scam. All Social Security contributions made by working Americans, except the amount which was needed to pay current retirement benefits, has been funneled into the general fund and used for non-Social Security purposes.(genocidal WAR to pirate workers/ minerals, oil in 3rd world. Which is why the transnationals gave campaign donations to fund the candidate, now in power)


Some like to say that the government just "borrowed" the money during the time period when it was not needed to pay benefits. But borrowing implies repayment, and no provisions for repayment have been made.So it is theft, plain and simple. For an evil war against third world impoverished people. 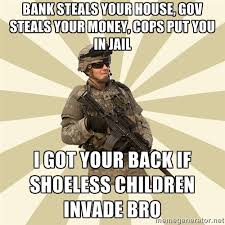 "Neither the redemption of trust fund bonds, nor interest paid on those bonds, provides any new net income to the Treasury, which must finance redemptions and interest payments through some combination of increased taxation, reductions in other government spending, or additional borrowing from the public."

In order for Social Security to pay full benefits after 2016, it will be necessary for the government to begin repaying the money it has spent on other things. This will mean increased taxes and/or additional borrowing.

Neither of these is politically popular, and there is no assurance that future politicians will be willing to raise taxes to pay for the irresponsible behavior of past politicians. If the money is not repaid in full, with interest, it will have been stolen by the government from working Americans who paid into the fund.

Given the fact that Section 13301 of the Budget Enforcement Act of 1990 made it a violation of federal law to use Social Security revenue for non-Social Security purposes, it is hard to justify using the word "borrow" to refer to any of the Social Security money spent after 1990, even if it is eventually paid back.

Allen W. Smith is a Professor of Economics, Emeritus, at Eastern Illinois University. Dr. Smith is the author of seven books and holds a Ph.D. in economics from Indiana University.

<=== BACK TO TRUTHS ABOUT GOV YOU WILL NEVER READ IN ANY NEWSPAPER,

<=== BACK TO THE MELTDOWN AND ITS CAUSES