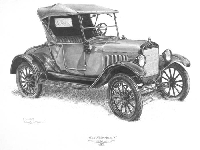 The upholstery on the driver's seat is in shreds. Masking tape patches a cracked tail light. And the odometer reads 223,626 miles. To some, it would definitely be time for a trade-in. But to Suren Rostonmyan, the 1986 Toyota pickup still has a lot of kick left. By staying on top of oil changes and continuing the TLC, he figures the reliable red truck could hit 300,000 miles without a hitch. Why do you think TERRORISTS in ARAB WORLD COME HERE TO BUY THEM ALL  UP?

Although there's no one secret to getting cars to reach 200,000, 300,000 or
even 400,000 miles, experts say it's a combination of luck and proper
maintenance that keeps the old odometer ticking along.

While it helps that Rostonmyan is a mechanic, you don't have to be one to
keep your car running for a long time.

For starters, change the oil every 3,000 to 4,000 miles, said Vince Novak,
owner of Novak Automotive in Canoga Park.

People who bring their cars to the shop for regular oil changes also get
fluids topped off, tire pressure adjusted and other basics checked, which
can prevent serious trouble in the long run, Novak said.

Still, it also helps to have some good fortune on your side, he said.

"It's called luck. There's no such thing as a strategy," Novak said. "The
best thing is to stay on top of your vehicle, and change the oil."

The same advice has worked for years for Carroll Stark, who just got the
oil changed at Hans German Car Repair in Valley Village on his 1989
Mercedes-Benz.

With 337,000 miles on it, it is the latest in a series of high-mileage cars
for the 82-year-old Toluca Lake resident.

His 1965 Oldsmobile Toronado lasted about 220,000 miles. The Chrysler New
Yorker and another Mercedes-Benz each clocked 250,000 on the odometer.

"I tell a lot of my friends that if the auto industry relied on me for
their sales, they'd all go broke in a hurry," Stark said.

Having a reputable mechanic makes all the difference when it comes to
keeping the car around for a long time, Stark said. He warned about the
ones who hoodwink drivers into getting work that they don't need.

That's not a problem for Lupe Barreto and the 1988 Toyota Camry with
178,300 miles that sits in her driveway. All the work on it is done by her
son-in-law Richard Alfonso, owner of Clutch Masters in Tujunga.

Although the Glendale woman would like a new car, she doesn't see that
happening anytime soon, with this one expected to last well beyond an
odometer reading of 200,000.

"I want a new car," Barreto said. "But I will run it till it doesn't run
anymore. These are good cars."

Alfonso said the key is regular maintenance and having a car with the
craftsmanship like his mother-in-law's Toyota. Tinkering with his own cars
has made them last a whopping 500,000 miles.

A Toyota Corolla that family members passed on to one another through the
years had more than 200,000 miles on it by the time it reached Julie
Armentrout of Burbank.

Time had weathered the car's appearance, making it an eyesore compared with
sleek, newer models on the road. But its history of routine oil changes and
maintenance kept the car going, she said.

"The car wouldn't die, no matter how ugly it got," said Armentrout. "It was
die hard. It was good."

LET MS DOYLE'S ARTICLE INSPIRE YOU. Ask car fans to give you good
warnings or tout you in the right direction. My car chum says FORDS were
never any good after 100k. Everything died on them. My pal's JEEP did
the same thing. DRUG CZARS only buy TOYOTA TRUCKS so investigate
why that is, but not with the crooks. From MECHANICS.

A chum of mine has a Toyota sedan,2 door, to change plugs you have to LIFT out the motor
so make sure you can GET TO PLUGS THE NORMAL WAY.

We're talking buying USED so why bother buying Cars with COMPUTER CHIPS.
Avoid them. They die fast and they are costly. Don't want to bother with all this, just need
an occasional visit to MARKET? ? GET A RAD WAGON,(used if you can). NO DRIVER'S LICENSE REQ'd.

As to safety, the bike has not caused me any injuries although I have shifted my weight wrong when dismounting/mounting as there is a bit of a step up to address it. It has thrown me onto the bushes twice. until I got the hang of it. RELEASE THE DUAL KICK STAND AFTER YOU MOUNT AND IF CARRYING A LOT OF CARGO, BEFORE YOU DISMOUNT, THIS STABILIZES THE BIKE LOAD. A heavy bike takes some getting used to.

One time only so far, which is enough, a lady on her CELL PHONE rolled out of a service station, touching my bike, so that I had to push off the hood of her car, No injury and no damage to the bike. I did not trust my self to react, I just rode away.

As the city becomes deadlocked due to quake or other natural or man made disaster, the by ways will be clogged, the freeways parking lots. With the necessary supplies you mount your E-bike and slip silently out of the city environment, making your own path to escape as you go. You should have https://www.radpowerbikes.com/products/radcity-step-thru which can carry modest cargo. If you search the site you will find a link for an interest free loan...or apply to https://securelogin.synchronybank.com/myaccount/loginUserActionGetOnly for an 18 month interest free loan.

Tell you true, WATCH PEOPLE  in traffic as THEY ARE STUPID !!! Average SUV driver does not see a bike, I do not know why. Not looking for anything but other cars, bike does not register. I stick to sidewalks when there are no bike lanes. Typically I go on the street on Saturdays and Sundays while traffic is light too. Overall the bike is as safe as you are.

I'm VERY SAFE. I won't even prune a tree as that's how 96 yr old Vegan George Bernard Shaw died. I only let myself enjoy 1 Hershey bar a month.
And I do not drive a car or as cats stretch and sharpen claws on new SEARS BIKE.. Why pay to fix tires?

Battery is Lithium as with the notebook computer. Such batteries are often still good but the BMS (Battery Management System) has failed. I have equipt myself with the materials to build my own bike batteries. I watch this guy like a religion,... aka James Bond on his Rad Rover .....

He has made me aware of the bike's capabilities and reliabilities. You might want to select a few of his videos as he has three Rad bikes and a fourth on order. I have not seen anyone who has needed to replace their battery --- some have over 10,000 miles on their Rad bikes.

Our POSTER is ANITA SANDS HERNANDEZ, Los Angeles Progressive Researcher, bigtime "POSTER" / Writer,  Mother of 4 and career Astrologer. Catch up with her websites  TRUTHS GOV WILL HIDE & NEVER TELL YOU, also The  FUTURE, WHAT'S COMIN' AT YA! & HOW TO SURVIVE the COMING GREAT DEPRESSION, and HEALING Secrets of Nature, HOLISTIC, AFFORDABLE HEALING. Also HOW TO LIVE on A NICKLE, The FRUGAL PAGE. and 50 other themes that appeal like GETTING ON THE DOLE, HOW TO NEVER NEED A VET FOR YOUR PET .. HER MAIN PAGE WITH CLICKABLE ICON-PORTALS is THE PORTAL TO 7001 CLASSES-WEBSITE!  FREE TO YOU TO REPUBLISH, ATTRACT AD REVENUE.
Anita is at astrology@earthlink.net ). Get a FREE natal horoscope "my money/future life" reading now + copy horoscope as a Gif file graphic!

<=== SHOW ME THE HAPPY R)EVOLUTION PAGE

<===  BACK TO ARMCHAIR ACTIVISM AS ENTERTAINMENT AND FUN! Character building for Children.

<===BACK TO  "HOW THE ENRON SYNDROME  BECAME AN EPIDEMIC"

<==== BACK TO THE PORTAL to 7,000 FREE SEMINARS, the LIFE 101 INSTRUCTION PACKET YOUR PARENTS NEVER GAVE YOU. FREE FOR YOU. ATTRACT AD REVENUE

Post these ten thousand URLS at your site, better yet at your WEBHOST. FREE, KEEP them for LIFE even monetize them. GIFT from ANITA