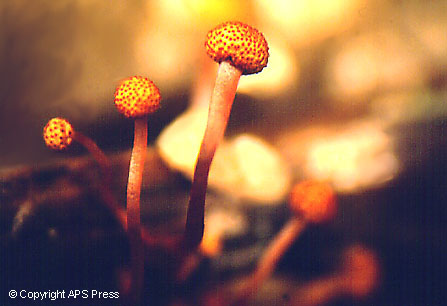 PICTURE is of actual MOLD on RYE GRAINS, ERGOT which is LSD
In Renaissance, entire villages would flip out. They called it St.Vitus
Dance. It was MOLDY RYE! So NATURE put acid trips in MIDDLE EUROPE

Dr. Dave Holland is the co-author, with Doug Kaufmann, of the best-selling book The Fungus Link, and the new book, The Fungus Link Vol. 2. In these books, and in their other books (Infectious Diabetes, and The Germ that Causes Cancer) they discuss the ravages that yeast, fungi and their mycotoxins (fungal toxins) can cause us when we are exposed to them. Health problems ranging from cancer to heart disease to asthma, multiple sclerosis, and diabetes may all be related to mycotoxins.

Mycotoxins cause a wide range of health problems in humans when we are exposed to small amounts over an extended period of time, and can even be lethal if taken in large quantities over a short period of time. Given the large number of diseases linked to mycotoxins* (see Dr. Holland’s list at the end of the article) and our tendency to eat a large amount of grains in our typical American diet, this is a very concerning problem. As Dr. Holland said, "Grains are sources of carbohydrates, or sugars, and as such, they risk contamination by certain fungi. These fungi produce secondary metabolites, or mycotoxins."

Dr. Holland has put together a list of the top-10 mycotoxic foods. You’ll notice as you browse through the list that it mentions lots of grains (wheat, barley, rye, etc.). You’re probably familiar with some of the dangers of grains mentioned on this site, and now you have one more reason not to eat them--they are commonly contaminated with mycotoxins.

You’ll also notice that peanuts are on the list. Peanuts are not only commonly contaminated with aflatoxin, a carcinogenic mold, but they will also distort your omega-3:6 ratio. A much better choice if you want to eat nuts are walnuts, as they will give you some beneficial omega-3.

One food that is not mentioned on the list is coconut oil. I want to point out that, while coconut oil is an incredible food in terms of nutrition and taste, many coconut oils contain mycotoxins. This is because they are commonly made with copras, or dried coconuts, which are often contaminated with mycotoxins. So in order to fully enjoy the benefits of this coconut oil, you will want to be sure that you find a company that uses only fresh coconuts to make their oil, like the Tropical Traditions virgin coconut oil on this site.

With that, here’s the top-10 list of mycotoxic foods that you will want to avoid.

Alcohol is the mycotoxin of the Saccharomyces yeast--brewer’s yeast. Other mycotoxins besides alcohol can also be introduced into these beverages through the use of mold-contaminated grains and fruits. Producers often use grains that are too contaminated with fungi and mycotoxins to be used for table foods, so the risk is higher that you are consuming more than just alcohol in your beverage (Council for Agricultural Science and technology. Mycotoxins: Economic and Health Risks. Task Force Report Number 116. CAST. Ames, IA. Nov 1989). Before you drink for the health of your heart, consider the other possible risks of drinking. There are safer ways of consuming antioxidants.

Corn is "universally contaminated" with fumonisin and other fungal toxins such as aflatoxin, zearalenone and ochratoxin (Council for Agricultural Science and Technology. Mycotoxins: Risks in Plant, Animal and Human Systems. Task Force Report No. 139. Ames, IA. Jan 2003). Fumonisin and aflatoxin are known for their cancer-causing effects, while zearalenone and ochratoxin cause estrogenic and kidney-related problems, respectively. Just as corn is universally contaminated with mycotoxins, our food supply seems to be universally contaminated with corn--it’s everywhere! A typical chicken nugget at a fast food restaurant consists of a nugget of corn-fed chicken that is covered by a corn-based batter that is sweetened with corn syrup!

Not only is wheat often contaminated with mycotoxins, but so are the products made from wheat, like breads, cereals, pasta, etc. Pasta may be the least-"offensive" form of grains since certain water-soluble mycotoxins, such as deoxynivalenol (vomitoxin), are partially removed and discarded when you toss out the boiling water that you cooked the pasta in. Unfortunately, traces of the more harmful, heat-stable and fat-soluble mycotoxins, such as aflatoxin, remain in the grain. Regarding breads--it probably doesn’t matter if it’s organic, inorganic, sprouted, blessed or not--if it came from a grain that has been stored for months in a silo, it stands the chance of being contaminated with fungi and mycotoxins.

Similar to other grains that can be damaged by drought, floods and harvesting and storage processes, barley is equally susceptible to contamination by mycotoxin-producing fungi. Barley is used in the production of various cereals and alcoholic beverages.

Not only are sugar cane and sugar beets often contaminated with fungi and their associated fungi, but they, like the other grains, fuel the growth of fungi. Fungi need carbohydrates--sugars--to thrive.

Sorghum is used in a variety of grain-based products intended for both humans and animals. It is also used in the production of alcoholic beverages.

A 1993 study demonstrated 24 different types of fungi that colonized the inside of the peanuts used in the report (Costantini, A. Etiology and Prevention of Atherosclerosis. Fungalbionics Series.1998/99). And this was after the exterior of the peanut was sterilized! So, when you choose to eat peanuts, not only are you potentially eating these molds, but also their mycotoxins. Incidentally, in the same study the examiners found 23 different fungi on the inside of corn kernels. That said, if you choose to plant your own garden in an attempt to avoid mycotoxin contamination of corn or peanuts, it does you no good if the seed (kernel) used to plant your garden is already riddled with mold.

The same goes for rye as for wheat and other grains. In addition, when we use wheat and rye to make bread, we add two other products that compound our fungal concerns: sugar and yeast! On the bright side, the mold induces LSD highs and ergotrate is used to make that drug. It is also made into a chemical for women, post birth, to get womb to spasms its way back to normal shape. So post birth, women ARE hallucinating and high.

Cottonseed is typically found in the oil form (cottonseed oil), but is also used in the grain form for many animal foods. Many studies show that cottonseed is highly and often contaminated with mycotoxins.

Here’s a hint: if you see mold growing throughout your cheese, no matter what you paid for it, there’s a pretty good chance that there’s a mycotoxin not far from the mold. It is estimated that each fungus on Earth produces up to three different mycotoxins. The total number of mycotoxins known to date numbers in the thousands.

On the other hand, some cheeses, such as Gouda cheese, are made with yogurt-type cultures, like Lactobacillus, and not fungi (Costantini, 1998/99). These cheeses are a much healthier alternative, fungally speaking.

Naturally, with this list coming from a group that opposes eating food that is merely contaminated with fungi, we’d certainly oppose eating the fungus itself! That would include common table mushrooms and so-called myco-protein food products.

Other foods that could potentially make our list are rice, oats and beans, given that these too are sources of carbohydrates. And occasionally food inspectors will come across a batch of mold-contaminated rice or oats. However, all other things being equal, these crops are generally more resistant to fungal contamination (CAST 1989).

*Diseases caused by fungi and their mycotoxins (Costantini, A. et al. The Garden of Eden Longevity Diet. Fungalbionics Series. 1998):