The Free Market: A False Idol After All? 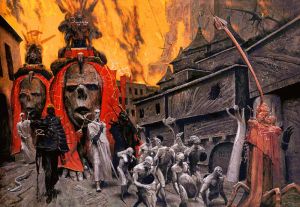 Marx predicted the Free Market would be religion of the CEO's of the huge transnationals, and that GATT AND NAFTA would suck the gold out of the proletariat's teeth. So the NYTimes finally said 'Amen' to Karl. Next thing Sulzburger Jr, should do is to get rid of pro-trade agreement religion, "FLAT WORLDER" THOM FRIEDMAN

FOR more than a quarter-century, the dominant idea guiding economic policy in the United States and much of the globe has been that the market is unfailingly wise. So wise that the proper role for government is to steer clear and not mess with the gusher of wealth that will flow, trickling down to the every level of society, if only the market is left to do its magic. (Who runs the market place? CEO's. Transnationals. IMF/ FED RESERVE, THE OIL MEN as they're the richest? HEY! What's fair about letting the foxes care for the henhouse?)

That notion has carried the day as industries have been unshackled from
regulation, and as taxes have been rolled back, along with the oversight
powers of government. Faith in markets has held sway as insurance
companies have fended off calls for more government-financed health
care, and as banks have engineered webs of finance that have turned
houses from mere abodes into assets traded like dot-com stocks. (Hey
add in Enron energy suppliers, utilities. Freeze the bucks out of citizens
& poor people, why doncha?)

But lately, a striking unease with market forces has entered the
conversation. The world confronts problems of staggering complexity and
consequence, from a shortage of credit following the mortgage meltdown,
to the threat of global warming. Regulation  nasty talk in some
quarters, synonymous with pointy-headed bureaucrats choking the market 
is suddenly being demanded from unexpected places.

The Bush administration and the Federal Reserve have in recent weeks put
aside laissez-faire rhetoric to wade into real estate, wielding new
rules and deals they say are necessary to protect Americans from
predatory bankers  the same bankers who, only a year ago, were being
lauded for creativity. Were the market left to its own devices, millions
could lose their homes, the administration now says.

Central banks on both sides of the Atlantic are coordinating campaigns
to flush cash through the global economy, lest frightened lenders hoard
capital and suffocate growth. In Bali this month, world leaders gathered
in the name of striking agreement to slow climate change.

Adam Smith used the metaphor of the invisible hand to describe how
markets should function: With everyone at liberty to pursue
self-interest, the market omnisciently distributes goods and capital to
maximize the benefits for all. Since the Reagan administration, that
idea has weighed in as a veritable holy commandment, with the economist
Milton Friedman cast as Moses. (TRICKLE DOWN THEORY, AAK!)

As the cold war ended and Communism retreated, the invisible hand seemed
to monopolize economic thinking. Even China, controlled by a nominally
Communist party, has blessed private entrepreneurs and foreign
investment. In Latin America, the International Monetary Fund financed
governments that embraced market forces while shunning those that were
resistant.(i.e. waterboarding for 3rd world countries that can't keep up
their loan payments.)

But now the invisible hand is being asked to account for what it has
wrought. In this country, many economic complaints  from the widening
gap between rich and poor to the expense of higher education  are being
dusted for its fingerprints. (neat metaphor!)

After two decades of disappointing economic growth, several Latin
American countries have spurned the I.M.F. while embracing the finance
and thinking of Venezuelas avowedly Socialist leader, Hugo Chávez.
Chinas leaders, though still devoted to reform and opening, are
keeping tight control on the value of the currency while steering
capital to powerful state-owned companies, concerned that freer markets
could throw millions of peasants out of work. (meaning Hugo sez 'I'll take
care of my pesos, thank you. Clear the F*&( out, IMF!)

Throughout history, regulation has tended to gain favor on the heels of
free enterprise run amok. (eternal dialectic) The monopolistic excesses of the Robber Barons
led to antitrust laws (in Teddy Roosevelt's time.). Not by accident did strict new accounting rules
follow the unmasking of fraud at Enron and WorldCom. Now, the subprime
fiasco and a still unfolding wave of home foreclosures are prompting
many to call for new rules.

Were revisiting the question of market flows with a deservedly wary
eye, said Jared Bernstein, senior economist at the liberal Economic
Policy Institute in Washington. For decades, economists and political
elites have argued that any time you regulate any aspect of the economy,
youre slipping the handcuffs on the invisible hand. Thats demonstrably
wrong in lots of ways.

But if markets can inflict pain, the harm from trying to tame them is
often worse, argue those who would let the invisible hand carry on. The
new regulatory tilt threatens to tie up innovation in a straitjacket of
bureaucratic nannying while slowing the global economy, they say.

Every regulation reduces peoples freedom, said David R. Henderson, a
libertarian economist at Stanford Universitys Hoover Institution. The
more regulation we get, the worse we do.

Mr. Henderson is critical of the Bush administrations effort to freeze
mortgage rates, and the new rules proposed by the Fed intended to curb
nefarious lending. They undermine the sanctity of contracts, he said,
while making mortgages harder to gain for everyone.

The way they justify it is that youve got to protect the stupid people
who cant read a contract, Mr. Henderson said. But theyre treating
everyone as stupid.

But in Washington, and under the roofs of many homes now worth less than
a year ago, there appears to be a shift in the nations often-ambivalent
attitude about regulation.

Back in the boom, banks made loans to homeowners who did not have to
prove their ability to pay, then quickly sold the loans to other
companies. By the time it emerged that a lot of homeowners could not
pay, these loans had been pooled with other loans and chopped into
strange new paper assets that were sold to unsuspecting buyers around
the globe. The subsequent reckoning has forced major banks to write off
vast sums of money.

Here you had all these people who were supposed to be sophisticated
investors, and it turns out they were buying billions of dollars worth
of debt where they didnt even understand what they owned, said Dean
Baker, co-director of the liberal Center for Economic and Policy
Research. There is going to be a willingness to re-regulate financial
markets.

Liberal critics have long asserted that dogmatic devotion to market
forces has skewed American society toward those of greatest means. More
wealth is being concentrated in fewer hands, with rich people capturing
the best housing, private education and health care services, and, as
the argument goes, only crumbs left for everyone else.

That critique informs proposals from Democrats vying for the presidency,
as they debate how best to expand access to health care and ways to
shift the tax burden to the rich. They are in essence calling for market
intervention to redress imbalances. With the gap between the richest and
poorest now greater than it has been since the 1920s, these pitches have
emerged as central components of their campaigns

More notable, though, is how fervent proponents of unfettered market
forces have lately come to embrace regulation.

The Bush administration, in seeking to freeze mortgage rates for some
homeowners, put Treasury Secretary Henry Paulson Jr. in charge of the
campaign. Mr. Paulson not long ago ran the Wall Street giant Goldman
Sachs. Now, he is demanding that banks accept smaller payments than
promised, while describing the market as a fallible thing in need of
supervision.

The government acted to prevent a market failure and to try to avoid
unnecessary harm, he said at a public meeting in California.

More than a decade ago, when Bill Clinton occupied the White House, he
pushed through the landmark North American Free Trade Agreement, which
linked the fortunes of Mexico and the United States. But if his wife or
one of her Democratic rivals captures the White House next year, they
promise a more skeptical look at trade deals.

Some argue that the push back against market forces is a momentary pause
in a steady march toward unfettered capitalism. The libertarian Cato
Institute recently issued a report in which it found that economic
freedom  shorthand for smaller government and fewer regulations  has
never been greater.

Few policymakers have a beef with that characterization as a generality.
But when things go wrong, demands grow for the government to step in and
make them right.

Untethered market forces lead to bad things, said Mr. Bernstein of the
Economic Policy Institute. You simply cant run an economy as
complicated as ours on ideology alone.

Adam Smith was Assigned To Scribble Against America

Lord Shelburne, as foreign minister, took the position that the former
colonies in North America must be once again brought under the British
yoke, but not through the deployment of military might or through claims
of property title. For Shelburne, the battle cry of the New Venice/New
Rome was ``free trade.''

That would be TARRIFF FREE BORDERS, essentially NAFTA AND GATT.

As early as 1763, in a famous carriage ride from Edinburgh to London,
Shelburne had commissioned two works from one of his East India Company
scribblers, Adam Smith. First, he had commissioned Smith to prepare the
research outlines for the study that would be later completed by another
India House propagandist, Edward Gibbon, on the decline and fall of the
Roman Empire--a study critical to Shelburne's commitment to establish a
new THIRD Roman Empire -- headquartered in London. In addition, he
ordered the preparation of an apologia for free trade, which Smith
completed in 1776 under the title The Wealth of Nations. ]

AND GUESS WHO BOUGHT THAT BOOK, HOOK AND LINE? KEYNES? NO, KEYNES LINED
UP WITH IT. THE CHICAGO BOYS DID, THE MILTON FRIEDMANISTS who run things
here. It became their BIBLE. Let wall street be unfettered, let the
bankster bozos run things. Let BERNIE MADOFF, do his number, and the SEC
should fear to interfere!

In 1787, Shelburne's leading intelligence agent Jeremy Bentham went one
better than Smith by publishing a series of letters from Russia that
were assembled in a pamphlet titled In Defense of Usury. The final
letter, addressed to Smith, chastized the India House economist for not
going far enough in his embrace of unbridled monetary dictatorship.
Bentham demanded an end to all restrictions on usurious interest rates,
employing the liberal argument that suppression of usury stifles
invention. Smith immediately wrote of Bentham's In Defense of Usury,
``The work is one of a superior man.''

Shelburne's own most eloquent plea for unbridled free trade and usury
came during his brief tenure as prime minister from 1782 to 1783.
Although he had formerly preferred to steer British politics from behind
the scenes in his capacity as chairman of the three-man ``Secret
Committee'' of the East India Company, Shelburne felt compelled to
briefly take the formal reins of government in order to ensure the
launching of his new British imperium.

SO HOW COME IT TOOK SO LONG? That's POISON for ya! ARSENIC takes a while too. But half way thru the DISEASE that poison produces, the effects are IRREVERSIBLE and death is certain!