THE PLOT SICKENS!The October Surprise to end them all.

Leave a few democrat spin-meisters and their henchmen in an Irish bar up late with a few whiskies and count on it. They come up with this PLOT that leaves Nixon's Merry Pranksters lightyears behind. An October surprise to end them all. And not just one head falling, LEGIONS of them. Forty key G.O.P candidates seeking office in midterm elections in NOVEMBER will be ousted, voteless, (unless Diebold machines can quickly be trained to step in,) in the wake of an HALLOWEEN week exorcism of the Speaker of the House, ( he ignored Pages complaining about pedophilia) and the firing of any and all fall guy assistants who ever heard pages' complaints and ignored their bleats.

If somebody set up this chessboard it was MACHIVELLIAN. Sure it seems to be DEMO wreaked or maybe just an amazing accident but CASSANDRA has had a vision. It was NOT an accident of fate nor was it designed like antrax, AIDS, Ebola or the Spanish American war.

! This most lethal jungle rot ever to leak out of a Green Monkey that has seemingly, accidentally fell on the G.O.P all on its own, simply clotting from the thick steam over all the rutting alphas in the jungle of Washington(The G.O.P that AIR AMERICA Radio calls the GRAND OLD PEDOPHILIC party) is final proof of Gods existence!

The Foley Folly and resulting cover-up by G.O.P is is the final Heavenly knock on the noggin for the Republicans. Who do you think sends down such visitations, one after the other in a chamade? First came the mysterious photos of ABU GRAIB torture chambers filled with Dungeon Master weirdness. Then the EXPOSURE of paid influence monger/lobbyist JACK ABRAMOFF who went to the guillotine for hustling dumb injun tribes and phony influence peddling. LAW AND ORDER did that show. Plus he was  taking cash to keep the sex trade alive in the Marianas as was the G.O.P way (kidnapped Asian girls as sex toys.) And taking this dirty stolen cash and giving it to bevies of Republican candidates for their campaign chests. Ouch that had to hurt. But then came KARL ROVE trying to impugn Valerie Plame and instead being shamed by Plame, (hanging offenses as U.S. spies were compromised bigtime). Then came GI's in Iraq doing a Mei Lei, raping girls and genociding their families.

But see? NONE of that caused the American Public to blanche, rise up and lynch the Bush Admin  So God took out his final Ace. He made an ABC executive, Mark Halperin go to a BLOG where PAGES WERE PUBLISHING. After YEARS of pages complaining about FOLEY fishing in the Page tank, finally some page took it to the blogspot and ABC a notorious G.O.P, CAPITOL CITIES corporation, once OWNED by super spy WILLIAM CASEY, a pro G.O.P branch of media representing the viewpoint of the ultimate on high GOP funders, banks, oil industry, seized on it and put the info out. 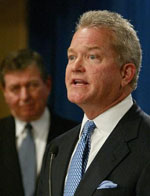 would really get knickers in a twist and omnisciently knowing that a man talking dirty to a boy would freak America out so theyd actually evict the Bush Regime that a.) allowed it, b). participated in a cover-up.

Republicans will try to convince you that the Donkeys were sucker punching with an OCTOBER SURPRISE but this was not a Donkey gambit. Theyd have taken it to the Washington Post or the Nation Mag, not some blogspot. This whole thing has features way bigger than the usual, Dem way of thinking and acting. It is apparent, even to atheists, that innocent kids put the shameful story on a blog as kids will and God stepped in and made ABC find it.Of such unlikely happenings is Gods will made manifest. I mean, what were the chances?

That combination of events was rife with "damn unlikely" and had cosmic miracle written all over it.  That page scandal was old news and OLD NEWS usually has fishy stink of 'borrrrring' written all over it. L'il PAGES had been writing Florida  newspaper columnists for years. Yawn.

Now are you going to believe that someone at ABC suddenly got hold of the info on a BLOG  called  http://stopsexpredators.blogspot.com/ ?? That's where and how ABC got it. Only God can cause a chimp to mutate into a Neanderthal. Somebody way up ON HIGH made the BLOG DNA cell leap into an ABC DNA cell. Who writes the DNA CODE? GOD AND ONLY GOD!

Who okayed the publishing of that story? Sure, some ABC henchman like Mark Halperin did but only after he made a phone call to someone high in CAPITOL CITIES and said we've stumbled on a new Watergate. It isn't like ABC to pull a WASHINGTON POST and down a REPUBLICAN PRESIDENT and his party. Deduce that it wasnt Halperin. If you believe in GOD you know who did it.

But, you may be an atheist, some kind ofscientist, and in that case you'll recognize that it had to have been THE highest of high Wall Street REPUBLICANS who are finally shaking loose of the BUSH group. They've had it. First and Last there was the Word. And the word ultimately is God and the word came from WALL STREET. The bankers. The oligarchs. Who are as sick of the war as the least hippy picketing the Iraq War last week in multiple cities. Proof that the Oligarchs were happy with the odd turn of events, the stock market suddenly peaked out of nowhere, U.S. stocks rallied Wednesday as a triple-digit gain lifted the Dow Jones Industrial Average to new highs the very day this scandal hit. This indicates the big boys with the bucks know theres hope for the American economy if Bush and his party loses.

Of course, there are some other oddball, harebrained theories.  Matt Drudge insists it's simply a kiddie-run Predatorgate which proves the kids know how to shoot down presidents as well as launch witch movies on the net.

This scandal seems to have mirror-like facets that reflect ourselves back to us. It is a litmus test for standersby. Matt Drudge tells us it's predatorgate, making himself come off like a paid lobbyist for the G.O.P http://tailrank.com/624254/Drudge-These-Kids-were-Playing-Foley-for-Everything-he-was-Worth.

I think its GOD, thinking typical of a Hollywood Cassandra. So, what do you think? Demo Driveby? Or the HAND of the SUPREME ONE saying I am tired of this savagery on these prayerful, nice Iraquis ---tired, tired tired!

Get on your knees, American heathens. Tell the Heavenly Father that you will make the Supreme effort and write your Republican Congressman and ask him to get lost and oh yes, while youre up, vote to impeach the President and Vice President and Speaker of the house. If not for a cover-up on FOLEY GATE, then for the other scandals: