BIG CORPORATIONS HAVE ACCOUNTING SCAMS GOING!
ENRON THE FIRST TO  GET CAUGHT.
THEIR ACCOUNTING FIRM TWEAKED BOOKS.
ENRON only one of MANY doing QAP's? (QUALITATIVE AUDITING PROCEDURES)
PDF ON WHAT THIS IS:
https://www.mbaknol.com/management-case-studies/case-study-the-enron-accounting-scandal/

'This Thing Involves Everybody' BUT IT WAS SO DICY, THEY HAD TO WAIT TO PREMIER IT the DAY BUSH  WAS RE-ELECTED,
DOUBLING ENERGY COSTS TO CONSUMERS! IN CALIF, THAT VERY DAY BILL DOUBLED! 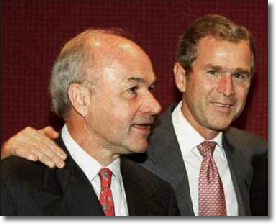 "Immediately after Big Business slave George W. Bush took power, Corporate
America went on a lying spree. Dan Rather, Tom Brokaw and Peter Jennings
appear loath to report that such high profile companies as Viacom,
General Electric, and Disney are also engaging in this wonky accounting
scheme." California citizens knew something was wrong the day
after the election when ENRON doubled the price of natural gas
to utilities there. Ken Lay knew that with Bush-support, he could do it.
He had virtually bought W the presidency. CROOKED AND CONNECTED !

A multi-trillion dollar financial scandal is occurring in the United
States right now. It threatens to inflict unprecedented carnage upon
Corporate America and horrific damage to our national economy. The
mainstream media is aware of it, but most Americans are not, because the
corporate news outlets refuse to report on it. It is not conspiracy. It
is complicity.

The coverage of the Enron situation has primarily focused on the
disintegration of a powerful corporation due to the deceit and
criminality of those who ran the company. The few reporters who have
looked below the surface have proven linkage between Enron's corruption
and its political connections to the Bush administration. While the
crimes of former Enron chairman Kenneth Lay and the collusion of former
Texas governor George W. Bush are significant, the corporate media is
selfishly choosing not to focus on the big story.

In February of 2001, Enron stock was trading above $80 per share, which
placed a market value of more than $60 billion on the company. Today, 2002,
the stock no longer trades, rendering Enron virtually worthless. It is
crucial to remember that, despite the harrowing decline in its fortunes,
the company never reported a bad earnings quarter.

Enron's duplicity is an extreme symptom of a financial cancer that
threatens the health of the economy. The disease is a malignant
accounting method that has received legal protection from conservative
politicians on behalf of their corporate benefactors. It is called 'pro
forma'. Originally intended to allow companies to compensate for
extraordinary events that distorted their financial reports, the pro
forma accounting method has led to the greatest fraud ever perpetrated.

Previously, publicly owned companies had been legally required to
provide shareholders with an honest accounting of their earnings. The
standard used was GAAP, Generally Accepted Accounting Principles. Under
this method, a company would state its earnings based on the old
fashioned equation of income minus expenses. Using pro forma, companies
decide which expenses are irrelevant, thereby providing great latitude
for creativity.

Freed from concerns about regulatory oversight, this country's biggest
companies became dramatically more 'creative' with their earnings
reports. Current estimates for S&P 500 corporations are that they have
collectively earned about $410 billion in 2001 when using the pro forma
accounting method. However, when using GAAP, they have collectively
earned about $240 billion.

Those who claim that Enron was an exceptional case are technically
correct. While Enron overestimated its earnings by 100%, the average
large publicly held American corporation is overestimating its earnings
by only 42%.

IBM reports pro forma earnings. So does Intel. And Cisco Systems. And
Dell. And Sun Micro. And Motorola. And Microsoft. And... By engaging in
such manipulation, with the assent of accountants and governmental
oversight agencies, Corporate America has conned the public into
investing trillions of dollars based on phony earnings. Cisco, for
example, has used its artificially inflated stock price as capital to
acquire other companies. Many corporate empires have been built on such
accounting legerdemain, including General Electric (NBC), Viacom (CBS),
Disney (ABC), AOL/Time Warner (CNN, Time Magazine), News Corporation
(Fox), The Washington Post Company (Washington Post, Newsweek), the
Tribune Corporation (Chicago Tribune, Los Angeles Times), and the New
York Times Company (New York Times, Boston Globe).

Enron is the tip of an iceberg on which sits the entire mainstream
media. A national association of accounting firms has called on the
Securities and Exchange Commission to require all publicly held
corporations to report real GAAP earnings. The return to ethical
accounting standards would mean that, in order to reflect the current
valuation of the Dow Industrials, the average would fall to 5825. In
order to reach the historical norm based on GAAP, the Dow would decline
to 3300.

A major decline in stock prices would erase trillions of dollars of
investors' wealth. With the uninformed public currently heavily invested
in the market, this would have a crushing impact on the finances of the
average American.

In 1995, Senate Republicans and almost half of their Democratic
colleagues joined to override President Clinton's veto of legislation
providing corporations with protection from shareholder lawsuits. The
leader of the effort to dramatically reduce civil liability for
companies that report phony earnings was Wall Street lobbyist Harvey
Pitt, who has made a career of defending the shady dealings of stock
market thieves like Ivan Boesky.

Just as his father hid the magnitude of the savings and loan scandal
until after the 1988 election, Bush is desperately trying to obscure the
truth about Corporate America's financial sleight of hand in order to
defer the tumbling of the house of cards until after the 2004 campaign.
He expects to be helped in this effort by the man he appointed to be
Chairman of the Securities and Exchange Commission, the one who is most
responsible for seeing that corporations accurately report their
earnings. Harvey Pitt.

The powers that be are pulling out all the stops. What they are fighting
is the law of gravity. As the high powered executives at Enron learned,
all the political machinations in the world can't prevent a stock from
falling when the word gets out that the books have been cooked.

After investors discover they've been scammed, they sell, and the
mightiest of companies can be crushed. Less than a year ago, Enron was
the seventh largest corporation in America. Today, it is no longer
functioning as a business entity. It is, for all intents and purposes,
dead.

The greatest legacy of the Enron debacle will be increased public
pressure on companies to report their real earnings. If corporations are
forced to be honest, then there will be shocking revisions in the
financial statements of America's most prominent businesses.

The current situation is a scandal of almost incomprehensible magnitude,
but it is not a conspiracy. For years, the disgrace of earnings
manipulation has been an open, dirty little secret. Dissidents like the
highly respected money managers at Comstock Partners
(http://www.comstockfunds.com/) and brokerage analyst Alan Newman
(http://www.cross-currents.net/charts.htm) have been screaming bloody
murder about how Corporate America is cheating the public.

Their voices have not been amplified. Dan Rather, Tom Brokaw and Peter
Jennings appear loath to report that such high profile companies as
Viacom, General Electric, and Disney are also engaging in the accounting
scheme.

The current reported level of corporate earnings is a mirage. The
investing public has been taken for a magic carpet ride. The deceit of
management, now so evident in the case of Enron, is endemic in corporate
boardrooms across America. It is the massive impending economic fallout
from that bitter reality which is the looming tragedy in this story.

While the media continues to focus on the microcosm of corruption at
Enron, the public at large has yet to be informed of the epidemic of the
earnings lies. As Deep Throat told Bob Woodward during the Watergate
scandal, when the reporter was focusing on the criminal behavior of
Nixon functionary Donald Segretti, "You're missing the big picture.
You're missing the overall. This thing involves everybody."

http://www.ratical.org/ratville/CAH/ultAgent.pdf
PROVES ENRON was the FIRST TO BE EASY TO SPOT and MAYBE EVEN  THE WORST and
certainly the  MOST NAKED but not the ONLY CONNECTED AND CROOKED CATEGORY CHEAT.

Find elected officials, including the president, members of Congress,
governors, state legislators, local officials, and more. `In a time of
universal deceit, telling the truth is a revolutionary act.'

But remember, just blaming the conservatives is overlooking that the
Democrats as well as the Republicans are both up to their eyeballs in
this national scandal. For once there is no bipartisanism on this
scandal they ALL are crooks! There were as many Democrats helping Global
Crossing for donations as GOP

<===BACK TO AMERICAN TRANSNATIONAL CORPS' MALFEASANCES

<== BACK TO THE ENRON SCANDAL REVEALED

<=== BACK TO THE ULTIMATE PROOF