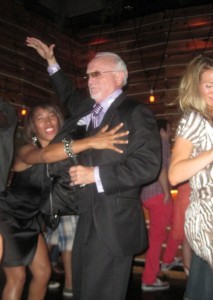 Bonuses for CEOs across USA soared INSANELY, JUST BEFORE THE CRASH!!! THE HANDWRITING WAS ON THE WALL!
But We didn't SEE IT!

CEO bonuses in the US rose a whopping 46.4 percent in 2004, according to a
survey of 100 major corporations performed by Mercer Human Resource
Consulting. The median CEO bonus stood at $1.14 million, the highest level
in at least five years in both absolute terms and percentage gain. BUT THE
100 BIGGEST CEOs in AMERICA GOT MUCH MORE.

The Mercer survey has been commissioned by the Wall Street Journal going
back to 1999. It excludes CEOs from Wall Street brokers and investment
houses, whose bonuses are even higher. Bonuses in the companies surveyed in
2004 reached a record 141 percent of annual salary.

In companies that granted across-the-board employee bonuses, clerical and
technical support workers typically received a bonus of 5 percent of salary
last year, according to independent surveys.

The direct compensation (including salary, bonus, restricted stock grants
and the exercise of stock options) of the median corporate boss totaled
$4,419,300—about 160 times the earnings of the average US production worker
last year. Direct compensation doesn’t count pension plans, severance
packages and numerous other perks that are lavished on CEOs.

Stock options are only counted as direct compensation when executives cash
them in. Option grants potentially worth millions in the future are not
included in the number.

One of the biggest winners on the bonus gravy train was Michael Eisner,
chairman of Walt Disney Company. He was awarded a $7.25 million bonus last
year, in spite of a move to oust him supported by 45 percent of the
shareholders.

John Tyson, head of the nation’s largest meatpacker, pocketed a $5.4
million bonus, in spite of an SEC investigation into his role in failing to
accurately disclose about $1.7 million in benefits paid to his father, Don
Tyson, when he was chairman. Tyson Foods and Don Tyson have offered to pay
a substantial fine to settle the SEC probe without admitting any
wrongdoing.

The younger Tyson’s employment contract guarantees him a $1 million annual
salary, “performance” shares worth $2.47 million a year, and an annual
grant of 500,000 stock options. He also gets personal use of the corporate
jet. Another perk last year was a $2,000 department store gift for the
holidays.

The Wall Street Journal quoted a Tyson spokesperson as describing the
company’s compensation package as “consistent with other programs at
similarly sized companies.”

Another leader of industry, Carly Fiorina, the recently fired CEO of
computer giant Hewlett-Packard, did not fail to collect her 2004 bonus. The
board of directors even awarded her a “discretionary” bonus in
mid-December, just before relieving her of her post this February.

For all the talk of “reform” in the world of mega-corporations, nothing has
fundamentally changed.

The bonuses that the heads of US corporations are pocketing serve as just
one measure of the obscene level of wealth being concentrated among the
financial elite. It may usually be carried out legally, with the approval
of their cronies who populate the boards of directors, but the effect is
the same as that produced by the outright criminality of such figures as
Kenneth Lay of Enron and Bernard Ebbers of WorldCom.

Lay sold hundreds of millions of dollars of Enron stock as he was touting
the stock to employees, then he froze their 401k accounts when the stock
started to crash. Ebbers is currently on trial for cooking WorldCom’s books
to mislead millions of small investors and employees, many of whom lost
everything when the company filed for bankruptcy.

While top executives are raking it in, wages for workers are diminishing. A
report issued last month by the Economic Policy Institute (EPI) shows the
first decline since 1993 in inflation-adjusted (real) wages for production
and non-supervisory workers, who constitute 80 percent of the workforce.

In contrast to CEOs, workers’ wages rose an average of only 2.1 percent
last year, well under the inflation rate of 2.7 percent, which jumped in
2004 due in particular to an increase in the cost of gasoline and other
energy. The nominal wage increase was lower than in any year since EPI
started tracking the statistic in 1964.

As wages have been declining, the Bush administration proclaims last year’s
12 consecutive months of job growth accompanied by a small drop in the
unemployment rate as a sign that the economy has finally turned the corner,
and that things are improving for workers. Administration officials credit
the Bush tax cuts for the wealthy—passed with key Democratic support—for
stimulating the economy.

However, analysis of the economy shows the worst job performance since the
Great Depression. Since the recession officially started in March 2001,
private sector jobs—those supposedly being stimulated by the tax cuts—have
declined by over 700,000. By post-World War II historical standards, by
this point in the “recovery” the economy should have created an additional
7,502,000 jobs compared to the negligible 62,000 net gain to date.

The decline in the rate of unemployment from 6.0 percent to 5.5 percent in
2004 was not a sign of jobs becoming more readily available. It reflects
instead the slowest growth in the labor force since 1991, as more and more
workers become too discouraged even to look for work.

Another measure of the abysmal job market highlighted in the EPI report is
the number of long-term unemployed. >From October 2002 to December 2004,
more than a fifth of those unemployed have been out of work for 27 months
in a row, a rate unprecedented in recent decades.

Over 3.5 million workers exhausted their unemployment benefits last year, a
record since the government began keeping track in 1973. On average,
workers were out of work for 39 weeks, or three quarters of a year, before
they ran out of benefits.

In December 2003, Congress cut off the Temporary Extended Unemployment
Compensation (TEUC) program, which provided up to13 weeks of additional
unemployment benefits for those still unable to find work after the
standard 26-week period. The reason given for the failure to renew the
program was that the recession had been declared officially over.

Compounding the difficulty of finding jobs has been the strong increase in
worker productivity. The rate of productivity jumped 4.0 percent last year,
on top of a 3.8 percent increase in each of the prior four years.

Standard economic analysis assumes that workers’ wages and living standards
increase with productivity gains; but mergers and corporate downsizing of
recent years—which increase productivity—have taken their toll on the
workforce. How hard it is to find a job has now translated into a decline
in real wages as well.

While corporate chieftains and their entourage are reaping sky-high
bonuses, the lives of workers remain mired in poverty, distress and
economic uncertainty. Earning 7 $ an hr in 2003 just isn't very
'white' of the Tyson family. LAWYERS suing them tell all.

A TYSON employee told all. URL was here a few yrs ago. 7$ an hour.

Now it's erased. Google those search terms, see what you can find.
I am anita sands hernandez at astrology at earthlink. net

<====BACK TO THE ENRON DEBACLE SURFACING EVERYWHERE NOW WEBPAGE