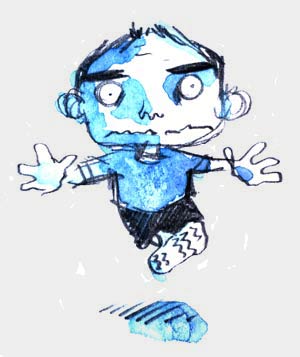 Results of a study funded by the National Institutes of Health (NIH).

A CLINICAL ANALYSIS OF ANTI-GOVERNMENT PHOBIA

This study conclusively demonstrates that unfounded fear of government is a recognizable mental illness, closely related to paranoid schizophrenia. Anti-Government Phobia (AGP) differs from most mental illnesses, however, in that it is highly infectious and has an acute onset. Symptoms include extreme suspiciousness, conspiracy-mongering, delusional thought patterns, staunch us against them mentality, withdrawal from reality, and often religious fanaticism.

Having the patient committed to a qualified mental health institution is the best option for family and loved ones. For this reason, all psychiatrists and family physicians should be provided with educational materials which will help them recognize the various symptoms and warning signs accompanying onset. Since comparatively little is known about Anti-Government Phobia at the present time, a government-funded health commission should be set up to oversee, and help focus, future research.

Anti-Government Phobia has a worldwide distribution, but has a particularly high incidence in the United States. Infection rates are estimated by mental health officials to be about 5% of the general population, and this rate is growing at an alarming rate. Rates are highest, but not limited to, those who are disaffected in some fashion, especially those who have a strong personal grudge against the federal government for one reason or another.

Although certain variants of the illness have been around for many years, it is only in the last decade or so that the more virulent and infectious strains have appeared. This is most likely due to the rapid buildup of government, at all levels, during the 1980s. Closely paralling this trend was an explosion in the number of cases in which individuals were diagnosed as having unfounded fears concerning such.

Clinical Manifestations and Diagnosis Anti-Government Phobia is marked by extreme suspiciousness toward government. Onset is acute. Symptoms start almost immediately after a run-in with some agency or institution of the government, or when the patient is introduced to anti-government propaganda, in one form or another, by a self-styled patriot. Common ways in which this harmful, anti-government propaganda is spread include: books, pamphlets, magazines, newspapers, audiotapes, videotapes, short-wave and conventional radio programs, computer bulletin boards, and various Internet sites.

Upon exposure to patriotic propaganda, the patient mysteriously begins to imagine hidden links between unrelated current events, weaving these gross distortions of reality into a complex delusional web; a labyrinth of conspiracy theories with all imagined clues leading straight to the federal government. With further exposure, the patient becomes increasingly paranoid, and slowly withdrawals from reality. However, mental deterioration is usually so gradual that the patient is often unaware of it.

This mysterious malady progresses until the patient invariably assumes a staunch us against them mentality. For instance, in the patients warped mind-set, each new piece of gun-control legislation is oddly rationalized to be merely one additional step in an ultimate plot by the federal government to confiscate guns altogether. In some unusually severe cases, the patient assumes a survivalist mentality, stockpiling guns, ammunition, de-hydrated food, and other essentials, in preparation for D-Day or Armageddon.

At this stage, the patient also inexplicity experiences increased delusional thinking. For instance, he may start fallaciously believing that the Federal Reserve is not in fact part of the federal government, but is instead controlled by wealthy Zionists. Other far-flung delusions may involve the United Nations, black helicopters, concentration camps, or the Council on Foreign Relations (CFR). Delusions involving takeovers by foreign military troops, or jack-booted government storm troopers dressed in all black, are also commonly diagnosed.

Anti-Government Phobia is often associated with religious fanaticism. An excellent example of this is the infamous Branch Davidian case, in which most cult members preferred a fiery suicide over peaceful surrender to the forces of what they considered to be Mystery Babylon. There have been other prominant cases in which patriots have became involved with terrorist activity, fallaciously believing that they were somehow doing the will of God. More commonly, patriots have been involved in aggressive outbursts in courtrooms, and other public places such as town-hall meetings.

Overall, the worldview eventually adopted byexp patriots interprets modern-day news events as pieces of a giant jig-saw puzzle. Oddly, they believe that it is their solemn duty to put these unrelated pieces together in order to discover the underlying picture. The warped interpretive framework used by many patriots in their missionary-like endeavor of saving the lost sheep (derogatory term comparing non-patriots to lost sheep) is a hyper-literal interpretation of Biblical prophecies, particularly those contained in the book of Revelation.

Spread of the Illness 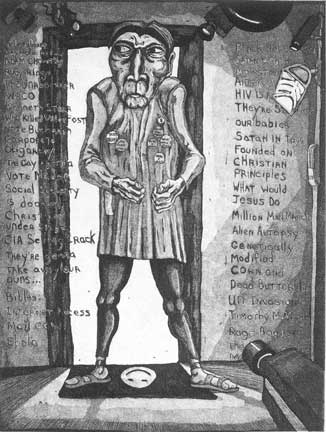 In the eyes of the so-called patriots, the relentless drive to indoctrinate others with extremist political beliefs is seen as a righteous and compulsory act to save their self-destructing nation.Wildly fantasizing that America can somehow turn back the clock to better times, which in reality never existed, many patriots feel obligated to quote constantly from the Declaration of Independence, United States Constitution, Bill of Rights, and the writings of the Founding Fathers. In an ironic twist of fate, when patriots expose others to their divisive anti-government propaganda, through their misguided efforts to restore individual liberty, they are actually infecting them with an extremely contagious mental illness.

A strong analogy can be drawn between patriotic indoctrination and patterns of religious conversion. In both cases, ultra-idealistic individuals believe that it is their solemn duty to gain proselytes for their particular faith. This is usually done on a person-to-person basis with a friend or acquaintance. To keep new converts from going astray or backsliding, they are eagerly provided with a steady stream of propaganda. In each case, the devotee imagines that there is an evil, sinister force which must be opposed at all costs. In the case of various religions, the faithful are supposedly rewarded in the afterlife for sparring with the devil. In the case of the patriot, the so-called New World Order is viewed as the demonic bogeyman, with the reward for opposing it supposedly being an increased amount of personal freedom. In both patriotic and religious circles, there is an entire counter-culture, centering around various anthems and holy books, constantly being promoted by prophets, preachers, and paranoid propagandists of all creeds, colors, and strains.

Needless to say, prevention is the first line of defense against any type of illness or disease. Unfortunately, many mental illnesses are genetic in nature and thus can not be prevented. Fortunately, Anti-Government Phobia is non-genetic and thus wholly preventable. From an individual standpoint, the most effective prevention policy is obviously not to allow oneself to become indoctrinated by a self-styled patriot, preferably by staying as far as possible away from any potentially divisive propaganda. As an added precaution, one should rely exclusively on well-known and reputable sources for news and other information.

Family members and loved ones can help out in this effort. However, it should be noted that prevention programs work best only when the entire community is involved. We all need to practice constant vigilance in order to spot diviseness and hate in our communities. In this regard, networking is the ultimate key to success. A successful community-based empowerment program would include the following elements: citizen-citizen networks, police-citizen networks, parent-teacher networks, pastor-parisoner networks, doctor-patient networks, state-local law enforcement authority networks, and federal-state law enforcement authority networks.

Although the prognosis is generally good if the illness is treated soon after symptoms first appear, studies have shown that a disturbingly low percentage of patients allow themselves to be treated. Thus, having the patient committed to a qualified mental health institution is the best option for family and loved ones. For this reason, all psychiatrists and family physicians should be provided with educational materials which will help them recognize the various symptoms and warning signs accompanying onset. Once the illness is properly diagnosed, they should next notify the patients immediate family members and discuss the various treatment options with them. This effort should be reinforced with extensive public ad campaigns promoting a 1-800 help line. Since comparatively little is known about Anti-Government Phobia at the present time, a government-funded health commission should be set up to oversee, and help focus, future research.

It can not be over-emphasized that prevention is the key to stopping the spread of Anti-Government Phobia. Once a person is infected, the illness is generally incurable. The only proven treatment is an extended, and often risky, de-programming session conducted by qualified professionals, such as the Cult Awareness Network (CAN). Left untreated, chronic symptoms invariably persist throughout the entire lifetime of the patient. Sadly, even the patients themselves realize this horrifying fact and surprisingly, seem apathetic to it. Oddly, they often confuse their symptoms with being awake. For instance, they have been known to garble gibberish such as once your awake, you cant go back to sleep. Further research is presently being conducted on the reasons why they rationalize their mental illness in this highly unusual manner.

FROM RUMORMILLNEWS DOT COM who got it from Len Horowitz

<===BACK TO TIPS ON HAVING THE FRUGAL LIFESTYLE (STUFF THAT WASN'T ON OPRAH!